Memorial of Saint Clare of Assisi

Homily for the Memorial of Saint Clare of Assisi 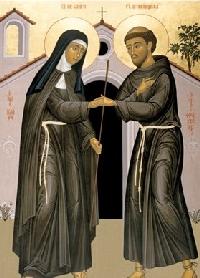 Today we honor St. Clare of Assisi. At age 18 she was inspired by the preaching of St. Francis to receive the religious habit. Her younger sister, Agnes, who was only 14, joined her a few days later. And not long after that, her mother and another sister did too. The Holy Spirit started a fire of love that spread among Clare’s relatives and friends. In a short time there were sixteen nuns in their first convent.

Following St. Francis, they chose a life of total poverty, not only giving up the right to own possessions personally, but also collectively. As a community they would live by the generous support of the people around them. Saint Clare writes: “They say we are too poor, but can a heart that possesses the infinite God truly be called poor?”

Along with poverty, the Poor Clares mirror the life of Christ in three ways: first, his hidden life for thirty years by their strict enclosure; second, his life of prayer by being contemplatives; and third, his self-sacrifice to save the world by their intercessory petitions and sufferings.

Over sixty years ago I attended Santa Clara University in California, as Fr. Mark did later on, and it was there that I decided at age 18 to give my life to Christ, just as St. Clare did when she was 18. But, alas, she went on to great sanctity while I’m still terribly lukewarm and negligent. May the fire of love that inflamed her heart also burn brighter and stronger in yours and mine.