Homily for the Memorial of St. Padre Pio

When Padre Pio was five years old he consecrated his life to God.  From that time onward, until his death in 1968, he had wonderful visions of Our Lady and struggled with diabolical appearances.  Little Francesco, (that was his baptismal name), thought these experiences were common to everyone.  One day he asked a companion, “Don’t you see Our Lady?”  He said, “No.”  Francesco, couldn’t believe it and replied, “You’re just saying that out of humility!” 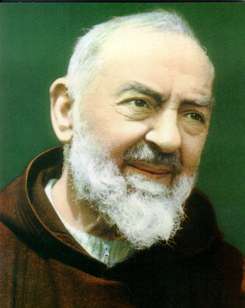 For the rest of his life the extraordinary was ordinary for him.  He was miraculously healed from typhoid fever at the age of ten.  He entered the Capuchins at age fifteen and received the name “Friar Pio.”  He levitated above the ground as a young monk, and received the stigmata at age thirty-one.  He was misunderstood and mistreated by superiors and even forbidden to exercise priestly duties for a whole year at age fifty-two while he was subjected to hostile investigations.  He could read souls, bilocate, converse with saints and angels, heal illnesses, and go without sleep and nourishment for long periods of time.  He made friends and enemies.

In all this he kept his sense of humor.  One day people were discussing how an airplane made a non-stop flight from Rome to New York in six hours. It seemed incredible at the time.  Padre Pio was listening, and then asked, “How long? How many hours, did you say?”  They answered, “Padre, only six hours and what is more non-stop!”  Padre Pio replied, “Six hours! Good heavens, that’s a long time! When I go it only takes me one second.”

Sometimes his answers to questions could be harsh. When asked, “Can you really hear your guardian angel?”  He replied, “Of course, do you think I’m deaf?”

Unlike his extraordinary gifts and graces, Padre Pio’s spiritual direction was very simple.  He often said, “Pray, hope, and don’t worry.”  If you worried about all your sins he would say, “Remember: the sinner who is sorry for his sins is closer to God than the just man who boasts of his good works.”  So, “Pray, hope, and don’t worry.”  Be joyful,and he even said, “Serve the Lord with laughter.”