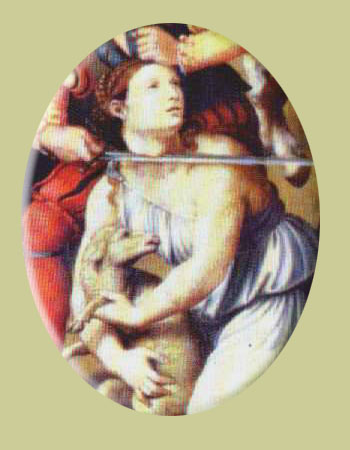 There are many wolves attacking the Body of Christ today, especially lust. It is not easy to introduce young people to God's gift of sexuality, the beautiful side of love and sharing one's life, or to prepare them for the sexual minefields they have to navigate as teenagers. One particular minefield today is “sexting,” sending explicit pictures and messages to each other on smart phones. To hide their intentions teens are using all kinds of abbreviations in text messages: like PAW which means Parents Are Watching, or POS, which means a Parent Over my Shoulder, or GNOC which means Get Naked on Camera, of YWS which means You want Sex? Sometimes this ends in tragedy, as when a thirteen year old girl in Florida committed suicide a few weeks ago because of what happened with sexting.

Today we remember another thirteen-year old girl who refused to be cut off from the Body of Christ. Like all teenagers she had to tread a sexual minefield, too. St. Agnes lived in a world of luxury as the daughter of an aristocratic Roman family. Her Christian parents had her baptized as an infant and nourished her faith. She consecrated herself to Christ as a young child. Agnes was clothed with fine dresses and jewelry on the outside, and with extraordinary prayerfulness and piety on the inside. Many young men were smitten by her beauty and charm. But when she refused to marry the son of a powerful Roman prefect her battle began. She was thrown into a filthy dungeon to think things over, imprisoned among prostitutes. Later she was stripped and paraded through the streets of Rome to humiliate her. But nothing could break her commitment to Christ, not even fire or the sword that ended her life.

May the witness of young St. Agnes inspire all of us, teens and adults alike, by her example of chaste love and by her willingness to give her life for Christ, as Christ gave his for her.