The father of Aloysius Gonzaga wanted his son to become a soldier. The boy started his training at the age of four, when his father gave Aloysius a set of miniature guns and took him on expeditions so that the child might learn “the art of arms.” At the age of five, Aloysius was sent to a military camp. His father was happy to see him marching around camp at the head of a platoon of child soldiers. His mother was not so pleased with the vocabulary her son picked up at the camp.

Why, then, did Aloysius become a saint instead of a little terrorist? Why did he choose to serve God rather than some other master? In part because of his mother. She instilled into him the religious devotion with which her own heart was filled. He was more influenced by her prayers and good example than by his father’s military ambitions. 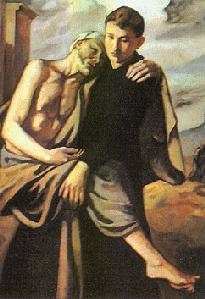 Growing up amid the violence and brutality of Renaissance Italy he witnessed the murder of two of his brothers. When he was eight years old, Aloysius was sent to serve at the court of the Grand Duke, Francesco de’ Medici. There he was shocked by the frivolous life-style and debauchery he encountered. So, he resolved to become a religious and made a vow of virginity at the early age of nine. He writes, “It is better to be a child of God than king of the whole world.”

After reading a book about Jesuit missionaries Aloysius entered the Society of Jesus when he was seventeen years old. Six years later, during the plague of 1591, while he was ministering to the sick, Aloysius caught the plague. He died from it at the age of twenty-three. Miracles following his death witnessed to the intensity of his love for God and neighbor.

How fortunate are children who have people to inspire them along the right way from their youth, and who are given good books to encourage and motivate them in their search for God!

Like many of us here, I also was so fortunate! I learned piety from both of my parents, and I was inspired by the Trappist way of life after reading Fr. Raymond’s book, “The Man Who God Even with God.” May we in our turn inspire the youth of our times by the witness of our lives, by our encouragement and by the gift of good books to motivate them in truly seeking God.