“The Hermit Kingdom!” That's what Korea was called for several hundred years, not because it was monastic, but because its borders were tightly closed to foreigners. But in 1777 a few government officials went to Peking to pay taxes because Korea was subject to the mighty power of the Chinese Empire. On that journey they met Jesuits from the Paris Foreign Mission Society who converted them to Christianity. With joy they carried the Word of God back home with them. Over the next fifteen years, by reading the Gospels and prayer, Christ was born in the hearts of 4,000 Koreans. Over the next seven years this little community of Christians grew to 10,000. Among them was a 50 year old man named Pius Kim, the great-grandfather of St. Andrew Kim, whose feast we are celebrating this morning. After his conversion, Pius Kim resigned from public office and dedicated himself to living his Christian faith. The Korean dynasty did not appreciate this defection to a foreign religion. He was arrested and spent the last ten years of his life in prison while they tortured him to make him recant. But they failed, and finally put him to death. 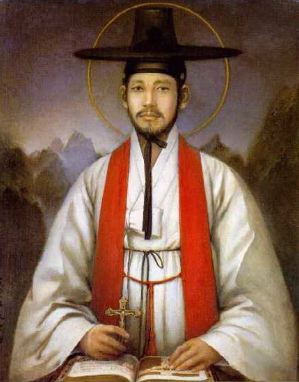 Pius Kim's grandson, Ignatius Kim, the father of St. Andrew Kim, was also a man of deep faith. He moved his family to another Province to escape persecution. A foreign missionary secretly entered Korea and visited Pius Kim's family. He persuaded the fifteen year old Andrew Kim to become a seminarian along with two others. They had to sneak out of Korea and walk to the nearest seminary which was 1,300 miles away, in Macao, China. Their journey took eight months. What hardships these young men had to endure to follow their vocations in those times!

Shortly after Andrew Kim entered the seminary his father was caught, arrested and beheaded. Andrew continued his studies and was ordained six years after his father's martyrdom. He was the first native Korean priest. Persecution of Christians intensified, causing them great sufferings. After his ordination on August 17, 1845, Fr. Andrew Kim secretly returned to his people and ministered to them. Less than a year later he also was caught. Like his father and great grandfather, he was tortured and he was beheaded at the age of 25. On the day before he died in September, 1846, he wrote a last testament saying, “There are many miserable and sad things in the world. … But be steadfast … and practice greater charity so that we may meet again in God's eternal mansion.” 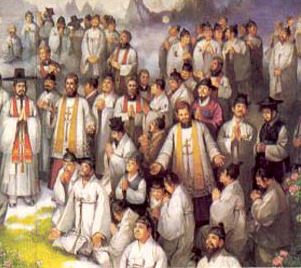 The Church in Korea has remained steadfast and continues to grow. Out of the first 23,000 Catholics, 8,000 were put to death, one out of three converts. This small Church grew to 50,000 by 1900, and to150,000 by 1950. In the past sixty years the Church in Korea has grown to over five million Catholics. Tertullian's words have proven true: “The blood of martyrs is the seed of Christians.”

In our Eucharist this morning we will be united with Christ in his sacrifice for us, and also with all the martyrs and people of God who have persevered in faith, hope and charity. May we be strengthened by this union to be faithful so that we also may meet them in God's eternal mansion.