Memorial of St. Anthony of Padua 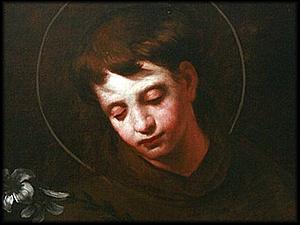 Few of us remember St. Anthony of Padua for his preaching, but nearly all of us have invoked his help to find something we lost.

As the saying goes: “When young or old your aid implore, treasures lost are soon restored.”

It began like this. A novice who had grown tired of living the Franciscan
way of life decided to depart. When he left he also took Anthony's book of Psalms.
Upon realizing that his Psalter was missing, the saint prayed it would be
found. Legend has it that a ferocious looking beast stopped the novice
in his flight and sent him fleeing back to the Franciscans where he returned
Anthony's treasure and also refound his own vocation. I believe Anthony
rejoiced more over the return of the novice than over his Psalter.

Our greatest treasures are not things, but people. Our work as Christians
by means of prayer and example is to be light, salt, and good leaven for the world
that those who are lost may be found, and they will be!