Memorial of St. Augustine of Canterbury

Homily for the Memorial of St. Augustine of Canterbury 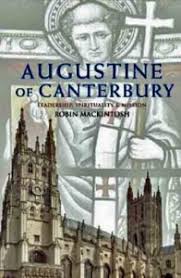 St. Augustine of Canterbury, the Apostle of England, was a very human person who suffered, like many of us, from a failure of courage.  He was sent by Pope Gregory the Great to evangelize England.  On the way from Italy to the British Isles he and his fellow missionaries were frightened by stories of the ferocity of the Anglo-Saxons.  So they made a big U-turn back to Rome.  But Pope Gregory commanded them to continue their mission, so they did.  Augustine made many mistakes and often wrote to Rome for decisions on matters that he could have decided on his own if he had been more self-confident.  But his perseverance in spite of fear and self-doubt led to many conversions and Augustine became the founder of the Church in England, and the first Archbishop of Canterbury.  Pope Francis once said, “We honor the saints not because they were perfect, but because they let God direct their lives.”1  We can’t be perfect, but we can be saints.