St. Augustine opened his heart to us in his autobiography, The Confessions. If we wrote down what we felt and did while growing up, would we be as honest about our sinfulness as he was? First he confessed to being greedy as a child, and stealing sweet things to eat when no one was looking. I could confess to that. But he also confessed to cheating at games, caring only to come out first whether he had played fairly or not. How many of us have also done that?

Then, when he grew a little older, he didn't steal because he was greedy or a glutton, but out of sheer pride and boastfulness, thinking it was manly to show off to other boys how little he cared about doing wrong. Just because he thought it fun to steal, he and his companions went out and robbed a pear tree of its fruit. After tasting a few they threw the rest to the pigs. He wouldn't have done it alone but Augustine wanted his companions to admire him. His ego was even greater than his sensuality. Now that's serious. 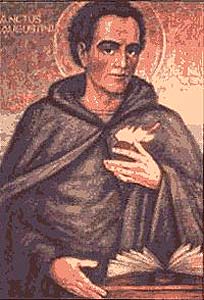 Our guest, Al McDonald, told me that ego means “edging God out, e-g-o.” That's pride, making oneself the center. As the years went by it seemed his pride and evil ways would break his mother's heart. There are many parents today trying to inspire their children with a love of God and the gift of Catholic faith who can identify with Monica's tears! We can all take courage from the words of Bishop Ambrose who comforted Monica with the promise that, “The son of so many tears cannot be lost.”

This is the vocation of every Christian, to desire and pray for the salvation of others. And so it came to pass that Augustine was converted and became one of the greatest saints. He wrote, “If your desire is without ceasing, your prayer will also be without ceasing.” Isn't that what St. Paul and St. Benedict urge us to do: to pray always, and never lose heart?

After his conversion Augustine wanted to be a monk. He went to Cassiciacum to form a small group dedicated to a quiet way of life, and he wrote a Rule which soon became one of the “Mother-Rules” along with those of St. Anthony, St. Pachomius and St. Basil. He begins his Rule with the admonition “to be turned towards God,” to be centered on God. 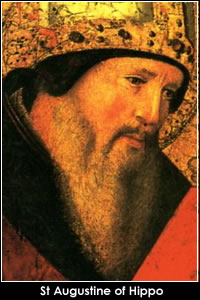 The Psalms are God's prayer book. They express God's desires for us, and teach us how to be centered on Him, to pray constantly: “Like the deer that longs for running streams, my soul is longing for you, my God.” “Oh, when can I enter and see the face of God.” “My soul is longing and yearning for the courts of the Lord.” “Like a dry weary land without water, my soul thirst for you.” That's unceasing prayer.

But let us take care that we do not desire what is sinful, and edge God out. For an unholy desire is also a prayer, but a wicked one, that insults God. Reflecting on his own lust, St. Augustine writes, “[My] pampered lust became custom, and custom indulged became necessity. These were the links of the chain; this is the bondage in which I was bound.”

Our hearts are a battle ground of conflicting desires. We come here this morning, and every morning, to purify our hearts, to put Christ in the center, to answer his prayer that we may see the face of God, by giving our lives, our very self, to loving God.