There are several stories about St. Cecilia. None of them are considered historically true. It doesn’t at all matter to me. I read stories of the saints for inspiration, for help in trying to live for the important-in-itself rather than just for satisfaction. They give a right order to my valuing.

It is said of Cecilia that, on her wedding day, she “sang to the Lord in her heart” so she is named patron of music. As patron she has inspired composers such as Handel and, more recently, Paul Simon.

Cecilia died after apparently refusing to worship other gods. She is an example of the 8th beatitude: “Blessed are those who suffer persecution for righteousness sake…” Her story tells us about the difficulty a person has in choosing the impo 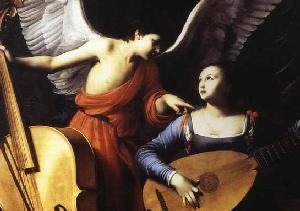 rtant-in-itself over the immediately satisfying. I faced this in many different forms during novitiate. In various ways I had to choose between the ultimate, the infinite, and the chocolate. I had to make daily decisions for the intangible, the not very tasty, but that could only be preferred if love is growing for the pervasive, enduring, and deep.

In short, one has to attach the will to what Is good; ultimately and infinitely good. This is the goal of monastic life. It is for this that one puts Christian principles before one’s own personality.

That is what Jesus did and subsequently so did Cecilia. St. Bernard taught how the beatitudes bring us to this. We’ll look at that tomorrow.