Homily for the Memorial of St. Dominic

Homily for the Memorial of St. Dominic 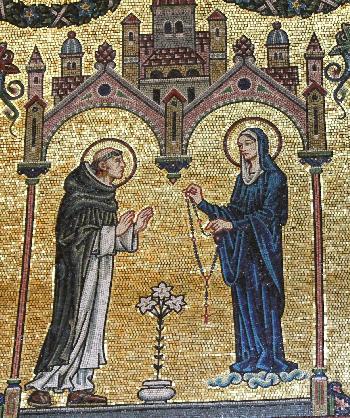 An early source of St. Dominic’s spirituality relates that he practiced nine ways of personal prayer.  In humility he would make a profound bow, or lie prostrate on the ground. To express reverence he would frequently genuflect.  If his prayer was penitential he would whip himself.  In adoration he would fold his hands together.  When making a petition he would raise his arms with open hands to receive what he asked. Sometimes he would sit quietly reading the bible and bend forward to kiss the Word of God.  At other times he prayed out loud, exhorting himself to better ways.  Frequently he would pray while walking or pacing back and forth to avoid drowsiness.  And he liked to find deserted places where he could give himself over to quiet contemplation.  His body shared in his life of prayer as much as his spirit.  But above all these ways of praying, his favorite prayer was the rosary.

So, how did St. Dominic pray?  By dancing before the Lord all the day long.