In St. Benedict’s Rule for Monasteries he writes that “the abbot must adapt himself to a variety of characters in such a way that he may not only suffer no loss in the flock committed to his care, but may even rejoice in the increase of a good flock” (RB Ch. 2). 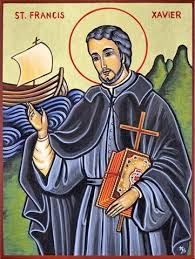 St. Francis Xavier, although he was a Jesuit and not a Benedictine monk, understood this principle very well.  When he first arrived in Japan at age 43 he tried to preach the Gospel in a poor man’s garb.  Nobody listened to him, and he even became an object of mockery.  Seeing his lack of success, he went back to the ship that had brought him to Japan and asked the captain to get him a fine suit of clothes, and any gifts that he could spare.  Then he sent a letter to the nearest of the Japanese rulers saying that the legate of the Pope of Rome had arrived, and would like to pay a state visit.  Francis Xavier was received with honors.1 The first step in the evangelization of Japan was made by adapting to the people.  Within a couple years Francis Xavier had made over two thousand converts.

This is like the good zeal St. Benedict urges us to have, “no one following what he considers useful for himself, but rather what benefits another” (RB Ch. 72).