Homily for the Memorial of St. John Bosco

St. John Bosco dedicated his life to helping street kids and juvenile delinquents by loving rather than by punishing them.  Where did he receive his wisdom and love of others?

He learned to love and teach from the example of his saintly mother.  Her husband died when John was two years old.  She had to raise three sons and care for an ailing mother-in-law at a time when Italy was suffering famine and great poverty.  By many sacrifices and hard work she provided what they needed, taught them, and encouraged John to become a priest.

After his ordination, when he opened a house for several homeless delinquents, she became their housekeeper and cook at age 65.  She continued taking care of them even when they increased to 150 needy boys!

Here’s a little bit of wisdom that St. John Bosco learned from his mother: “Do not put off till tomorrow the good you can do for others today. You might not have a tomorrow.”

Homily for the Memorial of St. John Bosco 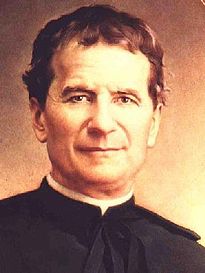 St. John Bosco wanted members of his religious order, the Salesians, to give homilies that were “short, well illustrated and within the grasp of everyone.”  It was good advice back in 1850, and it’s still pretty good today.

For example, he said, “No matter how tasty food is, if poison is mixed in, it may cause the death of the one who eats it.  So it is with conversation.  A single bad word, an unbecoming joke, an inappropriate gesture, is enough to harm someone, and may even cause someone to lose God’s grace.”

We have much to learn from the lives of the saints, that great crowd of witnesses we celebrate throughout the liturgical year.  Like this bit of wisdom from St. John Bosco: “There are two things the devil is deathly afraid of: fervent Communions and frequent visits to the Blessed Sacrament.”

May we give devils cause for fear by our love of the Eucharist, and by conversation seasoned with the wisdom of the saints.