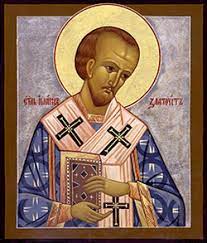 St. John Chrysostom1 has been called the saint of “joy in suffering.”2   While in exile he wrote to his dear friend, Olympias, telling her that “A dark and terrible storm surrounds me, a deep night and shadows that grow thicker, frightening shipwrecks—and yet I remain calm and tranquil, as though I were safe within the harbor.”  He was not using hyperbole; the storms and shipwrecks matched the realities of his life.

In a homily he writes, “Do not complain of being afflicted … fear rather to offend the Lord.”  Where did John get such courage?  Partly from his mother.  She bore two children. Her little daughter died when she was quite young, and shortly after John’s birth his father died leaving her a widow at the age of 20.  In her piety she embraced widowhood and resolved not to marry again, devoting herself to the upbringing of John.  Later in life John writes, “No words can describe the troubles which come upon a young woman who is suddenly plunged into overwhelming grief and burdened with responsibilities too great for her sex and age, at a time when she has only just left her father’s house and is inexperienced in the ways of the world.”  Of her one of John’s pagan teachers remarked, “What splendid women there are among the Christians.”

Resolute in her Christian piety, his mother tended to John’s religious education, acquainting him with the Scriptures and teaching him to love the Bible. John credited his mother’s early influence with providing his “enthusiasm for the good, his moral energy, his aversion to ostentation, his zeal for justice and truth and his steadfast faith.”  She lived for only a few years after John was baptized at age 19. John then became a monk and expressed his motivation this way: “We live in so depraved an age that if someone were to compare the words of the Gospel with what in fact goes on he would infer that men are not followers of Christ but his enemies … And the worst of it is that they don’t know it.” Much like our own times.

But monasticism was not to remain John’s vocation. He was ordained as bishop of Constantinople and was thrown into the great controversies of his day, including the denial of Christ’s divinity by Arias.  A few years later, after a death march to the remotest part of the empire, he died in exile after writing about “joy in suffering.”