Homily for the Memorial of St. John Neumann

What do you believe about the number saved?  How different were the times and beliefs of St. John Neumann compared to today.  This gifted young man wasn’t accepted by his seminary in Bohemia because there were too many priests. Not so today.  So he wrote to Bishop John Dubois in New York who accepted and ordained him in 1836.  Because of his outstanding pastoral work he became Bishop of Philadelphia in 1852, and during the course of the next eight years he founded over 100 churches and schools. By contrast, today many of our churches and schools are closing.  Another difference, in his days Catholics wanted frequent confession but many didn’t speak English. To help them Bishop Neumann learned six languages: Spanish, English, French, Italian, Dutch and Gaelic.  He spoke Gaelic so well that one Irish woman remarked, “Isn’t it grand that we have an Irish bishop!”  Today confession is often ignored. 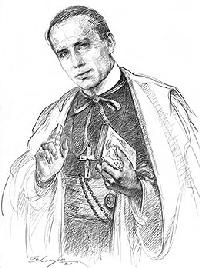 Why are there such differences between his times and ours?  Perhaps it’s because of different views about salvation.  St. John Neumann writes, “Notwithstanding assurances that God did not create anyone for hell, and that he wishes all to be saved, it remains equally true that few will be saved; few will go to Heaven; and the greater part of mankind will be lost forever.”1   His contemporary, St. Jean Vianney, the Cure of Ars agreed with him by teaching that, “The number of the saved is as few as the number of grapes left after the vine-pickers have passed by.”  And St. Augustine writes, “Not all, nor even a majority, are saved.”  “Beyond a doubt the elect are few.” 1

That’s very different from the optimism about salvation in our times. Bishop Robert Barron quotes von Balthasar, writing, “We may reasonably hope that all people will be brought to heaven.”  He also quotes Pope Benedict XVI who writes that, “The great majority of people who, though sinners, still retain a fundamental ordering to God, can and will be brought to heaven after the necessary purification of Purgatory.” 2 I hope that is true.  But then I remember the words of St. Jacinta of Fatima who saw hell: “So many people are going to die, and almost all of them are going to Hell.” 3

If the faith and devotion of many saints is mistaken about how few are saved, they will be happily surprised!  But if the beliefs and morals of our times are mistaken, then many are going to be miserably surprised when they die!  I want all to be saved, so I take to heart Mary’s words at Fatima when she said, “Many souls go to hell because they have no one to make sacrifices and to pray for them.” 3   I pray and make sacrifices every day for those who are at risk of being lost.  We can all do that if we really believe and want everyone to be saved.