Homily for the Memorial of St. Lawrence Ruiz and Companions

Who was St. Lawrence Ruiz whose martyrdom we remember today?  He was born around 1600 in Manila.  His Chinese father and Filipino mother were fervent Catholics.  As a young man Lorenzo joined the Dominican Confraternity of the Holy Rosary and served as an altar boy.  As an adult he married and had three children.  Lorenzo had an ordinary, happy family until he was falsely accused of murder. 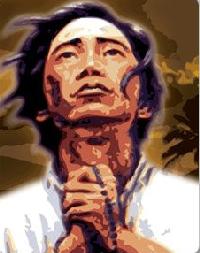 To save his life he found asylum with two Dominican missionaries sailing to Japan.  It was an unfortunate choice because 50,000 Catholics in Japan had already been dispersed or killed by persecution.  The three Filipinos were caught and imprisoned.  When they refused to deny their faith they were taken to Nagasaki to be tortured until they apostatized or died.  Their torture was extreme, lasting for days.  But Lorenzo said, “I am a Catholic and wholeheartedly accept death for God.  If I had a thousand lives I would offer all of them to God.”

St. Lawrence Ruiz was canonized by Pope John Paul II during the pope’s visit to the Philippines in 1987.  But what took so long?  His martyrdom happened 350 years earlier.  Perhaps there is an important lesson here.  His canonization had to wait for a miracle that took place in 1983.  The parents of a little girl suffering from incurable hydrocephalus prayed to Lorenzo and their daughter was completely and suddenly cured.  Perhaps it was not Lorenzo who was slow to manifest his sanctity, but we who were so slow to ask for the saint’s intercession.  Let us take heart, that in the communion of saints we have much to gain by frequently and quickly praying for their help.