Memorial of St. Martin of Tours

Homily for the Memorial of St. Martin of Tours 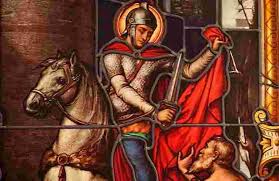 During the nineteenth-century, Frenchmen influenced by secularism, agnosticism, and anti-clericalism, deserted the church in great numbers.  But St. Martin was a man’s saint, so devotion to him was an exception to this trend.  For men serving in the military, Martin of Tours was their model of principled behavior.  He was brave, respected his obligation to the poor, shared his goods, performed his required military service, followed legitimate orders, and respected secular authority.

St. Martin was especially popular in France during the First World War.  Anti-clericalism declined, priests served in the army as chaplains, and more than 5,000 of them died in the war. The city of Tours became a place for national pilgrimages. When the armistice was signed to end World War One, it was signed on St. Martin’s day.

You have all heard of Indian Summer, those very warm Fall days that often happen in October.  But have you heard of Saint Martin’s Summer?  It’s based on one version of the story in which St. Martin cut his military cloak in half to clothed a shivering beggar.  Facing a long ride in freezing weather, St. Martin saw the dark clouds suddenly clear away and the sun shone so intensely that he was kept quite warm by its heat.  Such pleasant weather is rare in November, so the phenomenon is called St. Martin’s Summer.  It happened this year. 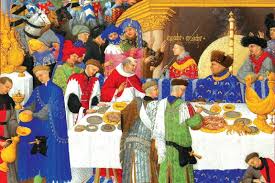 You are also very familiar with the 40 days of Lent following Mardi Gras, or Fat Tuesday, in preparation for Easter.  But have you heard of the 40 days of fasting following the feast of St. Martin of Tours in preparation for Christmas?  For many centuries it was called Quadragesima Sancti Martini, St. Martin’s Fast.  So, like Mardi Gras, on the feast of St. Martin people ate and drank very heartily for the last time before the fast began.  Wouldn’t it be nice if we had a hearty dessert waiting for us today, on this St. Martin’s day, providing that we don’t have to start fasting for Christmas tomorrow!