Memorial of St. Theodore the Studite

Homily for the Memorial of St. Theodore the Studite

St. Theodore the Studite is not a household name.  Even among monks he’s not well known.  So, who was Theodore the Studite?  He was born in Constantinople in 760 AD, son of a wealthy and powerful patrician who managed the emperor’s finances.  When Theodore was 22 years old he entered a monastery founded by Flavius Studios, an imperial consul.  Theodore’s uncle was the abbot.  Thirteen years later Theodore succeeded him as abbot of the Studite community. 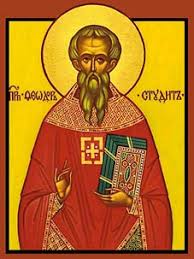 During his life Theodore was exiled and suffered torture three times because of conflicts with the emperor.  Like John the Baptist, he had a fiery and persistent temperament.  Parents of stubborn children could ask for his prayers.  Raising a stubborn child is hard, but stubbornness can be a gift.  It can help one persevere and even become a saint.

So what else is notable about this holy monk?  First, he’s one of the earliest opponents of slavery anywhere.  He forbade ownership of slaves because we are all made in the image of God.  In this he was a thousand years ahead of his times.  Second, he was a defender of icons when iconoclasm was the popular cause of the day.  We have his book on iconoclasm in our library.  Third, he was author of a rule of life for orthodox monks, beginning with only twelve in his Studite monastery and expanding to about a thousand in adjoining monasteries during his lifetime.  For St. Theodore the most important renunciation is the “martyrdom of submission.”  Along with obedience he encouraged his monks to love manual labor and provide assistance to the poor.  Like St. Benedict, he taught moderation in asceticism.  He writes, “Don’t cultivate a self-satisfied asceticism.  Eat bread, drink wine occasionally, wear shoes, especially in winter, and take meat when you need it.”1  Maybe ice cream, too.

St. Theodore was abbot for thirty-three years when he died.  What did his community most remember and love about him?  It was Theodore’s caring, tender, and maternal concern toward his monks and friends.2   May he pray for us slothful monks.