Homily for the Memorial of St. Vincent de Paul 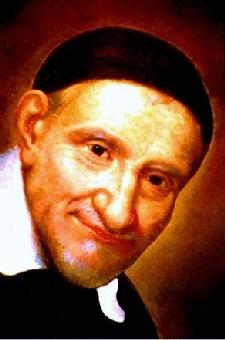 When St. Vincent de Paul was a young student away from home his father came to visit him.  But Vincent was ashamed of the poverty in which he grew up and he didn’t want to admit his poor origins.  So out of pride he refused to see his father who was only a poor peasant.  But he was also a truly humble man and didn’t hold on to this offence but forgave his son.  When Vincent needed money to continue his education, his father heroically sold a pair of oxen to help him.

Later, Vincent realized how self-seeking and self-centered he was.  He grieved deeply over that great sin against his father.  Gradually, after ordination to the priesthood and with the help of good spiritual direction, Vincent turned his heart to truly seeking God and he dedicated his life to serving the poor of whom he had been so ashamed.

Ever since then his work for the poor continues throughout the world.  In the United States alone the St. Vincent de Paul Society has 100,000 trained volunteers who help more than 23 million needy people every year.  Vincent gave this advice to his disciples: “It is a trick of the devil, by which he deceives good people, to urge them to do more than they are able, so that they end up not being able to do much of anything.  The Spirit of God gently urges us to do the good that can be done reasonably, so that it may be done perseveringly for a long time.”   It is not enough to begin well, we want to end well.