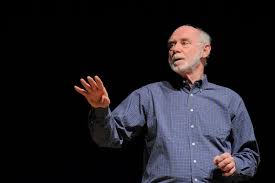 A story by Jay O’Callahan: When I was a little boy, Christmas Eve was very special. My sisters and I would run down the outside back stairs. It would be dark and cold. We’d run halfway across the street, and we would turn and look at our house. It was a big old house and it would be dark, but there would be a lit candle in every window. My sister, Maureen, would do it with my dad, and Maureen never forgot things. It would take our breath away.

Then we’d run across the street to the Graham’s and Dr. Graham would take us Christmas caroling, maybe 12 or 14 neighborhood kids. We’d go all over the neighborhood. Dr. Graham was the director of the Faulkner Hospital in Jamaica Plain, that’s in Boston, and he would work seven days a week, ’til 10 o’clock at night, but a few days before Christmas Eve he would come home early. He would gather us all in the living room to conduct us. Music was very important to him. 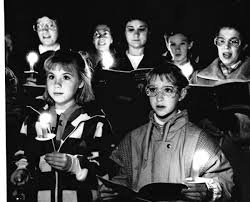 But then came the Christmas Eve when everything was different. My mother, usually full of energy, she was tired that day and she was pale. Three days before she’d given birth to my brother Christopher. Christopher! The name meant “Christ-bearer.” I had three sisters and now a brother, Christopher. He had this big name, “Christopher.” I had this little name, “Jay,” but he was Christopher. I could imagine Christopher coming home wearing his diapers carrying the card. “Christopher’s home!”

But Christopher didn’t come home. Something was wrong, maybe it was his heart. So mother was worried all that Christmas Eve day. Daddy was out shopping with Uncle Neal, which meant he might come home festive.  Later in the day there was a phone call. Mother picked it up, and the doctor said, “Your baby is dying. There’s nothing we can do,” and he hung up. It was so abrupt. Daddy was furious. He came home and got the doctor on the phone and said, “Listen. That is no way to tell anyone their child is dying. We will be right down.” 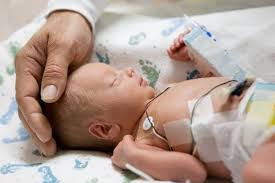 So we went down to the hospital. We were on the third floor. It was this glassed-in area. We could see these little babies, and one of the babies was turning blue. It was Christopher. Another doctor came over and said to Dad, “There is a new procedure. We replace the blood. We’ll know in a few days.”  So we went home, not knowing whether Christopher was going to live or die. Dad helped mother up our wide front stairs into the room. He came out of the room. It was dark, and he saw us in the hallway, and he said, “There’s nothing you can do. Just pray for the best. Go Christmas caroling.”

So we ran down the outside back stairs, ran halfway across the street and turned. We were so disappointed. All the electric lights were on. Even Maureen had forgotten to light the white candles. And Dr. Graham took us all over the neighborhood. He always knew who was hurt and sad and lonely. We would go to the Free Hospital for Women. We would do the Christmas caroling in the big ward, and the whole thing took two hours. So that night we came back over the hill towards our house, and we all stopped and looked at our big old house. It was all dark, but there was a little white candle in every window. And Dr. Graham said, “We’re going to sing one more carol, for your mother.” 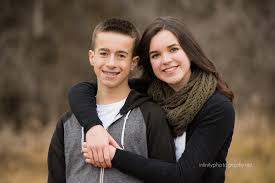 And we did something we’d never done before. We walked around behind the house and we were singing up towards mother’s window on the second-floor. The window was all black, but there was that little white candle. We were singing “Joy to the World.” He was conducting us, and then mother appeared in the window wearing a white house coat. She looked like an angel.

Ten years later we were finishing up the Christmas caroling, and Dr. Graham said, “One more carol.” It was a tradition now. We always sang up to mother’s window. So we were singing, and as we were singing, I had my college sweater on, as we were singing “Joy to the World”; mother appeared as she always did and then I looked…My sister was beside me, Maureen, and she was crying. And I thought, “Oh, she’s just been married. They’re moving to Chicago.” So I slid up next to her and whispered, “Don’t worry; Chicago will be alright.” She shook head and said through her tears, “That’s not it.”

She nodded to her left. Singing next to her was Christopher. He was 10 years old.  “Joy to the World; The Lord has come.”