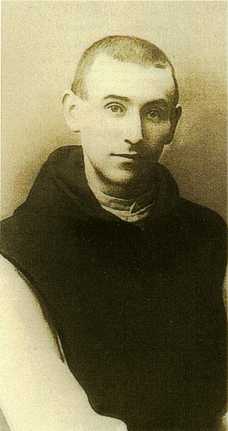 In the Cistercian Calendar for the Liturgical Year, today is the memorial of Blessed Joseph Mary Cassant, a Trappist monk of St. Marie of the Desert. He was a contemporary of St. Therese of Lisieux. He entered at the age of 16 and died of tuberculosis when he was 25. Why was he beatified in October, 2004? Academically he was a total failure. At age 15 he was in the same class as 10 year olds, and was rejected by the minor seminary. But the Trappists accepted him. There he became the student of a professor who took an intense dislike for Cassant and engaged upon a project of public humiliation. But his novice master inspired him to make a private vow never to give in to discouragement. Almost from the beginning of his monastic life he experienced migraine headaches, chronic pain in his knees, and the tell tale cough of tuberculosis. By this time everyone knew that his life was a sharing in the death of Jesus. The monks accepted him for solemn profession and he was ordained two years later, at age 24. Within three months Joseph entered the infirmary. The next six months until his death on June 17, 1903, were a participation in the agony of Jesus.

Why was he accepted as a monk, ordained a priest, and beatified? In so many ways Joseph Cassant was a nightmare vocation: intellectually slow, incapable of making friends, afraid of the opposite sex, lacking manual dexterity, having few interests, overly dependent, and physically sick.1 But after his death, over the next hundred years, more than four hundred favors and healings were recorded in response to prayers for his his intervention.

I think the message of his life and that of his contemporary, St. Therese of Lisieux, is that by persevering in the little way of an ordinary religious life both within and outside the cloister, lovers of God, followers of Jesus Christ become saints. It is in small things, the ordinariness of daily events and our little practices of devotion, lived with love that we also are becoming saints.