Monday in the First Week of Lent

Many years ago there was a popular reality television show called This is Your Life.  Producer Ralph Edwards would surprise famous persons by celebrating their accomplishments with appearances of significant persons from their past. One of the celebrities was Rev. Kiyoshi Tanimoto, a survivor of the atomic bombing of Hiroshima and a convert to Christianity. During the show Ralph 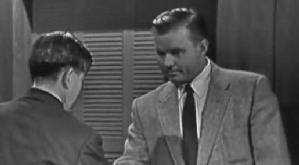 Edwards surprises Tanimoto by bringing him face to face with  Captain Robert Lewis, co-pilot of Enola Gay, the plane that carried the atomic bomb. At first it was a very uncomfortable meeting for both of them, but then Tanimoto does something enormously kind. He smiles warmly and shakes Captain Lewis’s hand.  Lewis responds with both hands, and Tanimoto does the same. They hold their hands together far longer than expected.

Perhaps the Last Judgment will be something like that.  In the Catholic Catechism we read that, “The Last Judgment will reveal even to its furthest consequences the good each person has done, or failed to do, during one’s earthly life” (1039).  So, every moment counts!  By the grace of God, we will all experience the fullness of reconciliation from everyone we have ever injured.