Monday in the Sixteenth Week of Ordinary Time

Homily for Monday in the Sixteenth Week of Ordinary Time

Last Friday we celebrated the 172nd anniversary of our community’s founding and today we pray for the many who have contributed to our longevity. This includes benefactors, friends, relatives, and members of our Order and our community.

Today’s gospel about the Sign of Jonah is fitting for the remembrance of our brothers. Thomas Merton named his journal of his early monastic years for this story. It is a sign of the monastic journey, of death (the swallowing), burial (the three days in the belly), and resurrection (the spewing up). It is a sign not just for monastic’s, but for anyone consciously, deliberately, and seriously living for their end; for union with God. We, however, know a monk’s journey best. For everyone the Sign of Jonah is a sign of God’s mercy.

Our monastic ancestors listened with the ear of their hearts to the basic requirement for this way of life.  Benedict put it in the very first paragraph of his Rule: to give up one’s own will and arm oneself with the strong and noble weapons of obedience. In other words, to put the principles he gave for them before each one’s own personality. This would require dying to self. This would enable them to do two things that would otherwise be impossible: to live in the truth and to meet the demands of love.

For the men in our cemetery this “living in the truth” likely involved some experience of the miserrecordia, the misery spoken of in a homily last week. This constituted the “readiness” Benedict said must precede our giving up of our will for the principles of the Rule. A man must be convinced he needs saving before he will seek a savior.

And then our predecessors gave themselves to “meeting the demands of love.” St. Bernard, speaking for all of us, asked God to “set love in order in me.” Our monastic ancestors were formed in an “ordo amoris”, an order of love whereby everything was given the measure of love appropriate to it. Thus, the heart of these men was formed. This new heart was the difference that made monastic life important enough to “persevere until death.” It changed their rules about what matters most and how things line up behind that. Things they loved before did not become bad, just less loved. In short, their world-view changed. Love made new demands and meeting those demands meant dying to self and living for the good of others. Gradually they were liberated from self-preoccupation. That’s how our predecessors spent their time in the belly. “Dying to self” is how each diminished living for his private, particular good and lived instead for the common good, the good for which he was made. That is what we recall about each man when we take him to his grave. That is what we, as the community, the belly they lived in, were to help them do. We’re doing that for each other now. A review of a monk’s life is a review of how we have been brothers.

And at the resurrection our forbearers will realize the well-known words of John and Paul (not the apostle’s, the Beatles) “And in the end, the love you take is equal to the love you make.”

Monday in the Sixteenth Week of Ordinary Time

Homily for Monday in the Sixteenth Week of Ordinary Time

Candidates for religious life often seek signs that God is calling them.  I did it myself.  After being a very lazy and poor student for three years in high school, I asked God for a sign: if I could get a 90 average on one of my four report cards during senior year, I would try to be a monk.  And that’s what happened, but only on the very last report card, a 93 average!  I’ve been grateful even since for the graciousness of God in answering a teenager’s request for a sign. 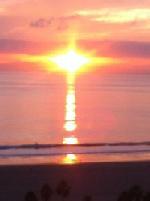 So, why was Jesus so ungracious to the scribes and Pharisees when they asked for a sign?  First, because Jesus had already given them so many signs, miracle after miracle, and they had the nerve to ask for more!  Second, because they were an evil and unfaithful generation, they were already determined not to accept any sign from Jesus.

But in his desire for their repentance, Jesus does make an exception by giving them the sign of Jonah who was in the belly of the whale for three days and nights.  They correctly understood that Jesus was talking about his own resurrection after three days in the tomb,

because after his death they asked Pilate to secure the grave so the disciples could not steal his body and claim that Jesus had risen on the third day.

Today we continue to live by signs, especially the seven sacraments which are visible signs instituted by Christ to give us the graces we need for salvation.  How fortunate we are to live each day with these signs of God’s love.