The woman in Simon’s house with the alabaster jar— some are indignant with her, then they are furious. We remember the Responsorial Psalm, where they scoff and mock with parted lips, and the crucifixion with its reviling, mocking, and abuse. Really, a small riot occurs in Simon’s house over the fact of this woman. The chief priests and scribes feared a riot among of people over Jesus. The woman broke the alabaster jar; literally, she destroyed it, and we remember how the authorities over and over again, kept trying to destroy Jesus (Mk 3:6; 11:17). She poured out the perfumed oil on Jesus’ head, as Jesus will soon pour out his blood for many, cleansing consciences, as the Letter to the Hebrews says, from dead works for the service of the living God. Mark in his Gospel reserves the Eucharistic anamnesis for this woman, of whom the beautiful thing she did will be told as Gospel in memory of her (Mk 14:9). The Passion Narrative according to Mark that we just heard— there are ten different locations in it and as many as twenty different individuals and groups of people. Some of those places we know, and some of those people are us. Simon’s house is this monastery church, or your parish church, or you home, our civic community. 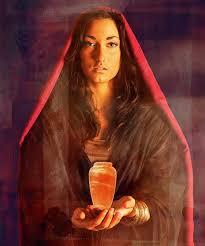 It is where you really try to take Jesus at his word, “Do this in memory of me,” and then see what happens when what you do in his memory meets political correctness, agendas of one kind or another, fixed priorities, and viewpoints that cannot comprehend humble obedience to the voice of another, can see no beauty and hear no truth in a face like flint speaking a word to rouse the weary: “Why this waste” of time, of money, of talent? And a small riot happens around your acting in his memory. Or take that anonymous man “carrying a jar of water” who meets the disciples sent to prepare the Passover. He is you the evangelist, the catechist, the missionary, meeting seekers with the wine of the Gospel, offering baptism, and leading them to the Sacrament of the Eucharist. I can’t think of anyone else besides him and Jesus in all the Gospels of whom it is said, “Follow him,” but such is the attraction and the prerogative of a disciple, that to follow him or her is to be led to Jesus. You are the centurion who even at the certain risk of undermining your own authority over your soldiers who said in mockery “King of the Jews,” confesses that, no, but rather “Truly,this was the Son of God.” You are that contemplative who facing the horror sees in and through it an astounding and unexpected beauty and truth the proclaiming of which changes your life forever. And you are the young disciple clothed oddly only in a shroud that you leave behind as you run off naked, who is also Jesus whom Joseph wraps in a shroud and lays in 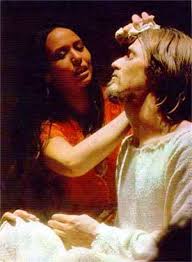 a tomb, only to leave in the nakedness of the new Adam, the resurrected body that was prepared for him to offer for us in fulfillment of the will of the Father (see Heb 10:5–7). Today’s magnificent Passion Gospel, the original and irreplaceable Passion Play, offers us a dozen and more avenues into the Mystery of this Week. Choose a place, choose a person, be there, be her or him or them, see, smell, respond, participate, “holding fast,” as the Letter to the Hebrews says, “to the confession of our faith,” stirring “one another to love and good works, not neglecting” to gather for the liturgies, “all the more as you see the Day drawing near” (Heb 10:23, 24, 25). Our account that began with an anonymous woman ends with two with names, Mary and Mary. Be them, who are all eyes of love and simply watch. Or, best of all, be Jesus, as Paul was, and say, “I have been crucified with Christ. I live now by him who loved me and gave himself for me” (Gal 2:20 paraphrased).