Jesus entered Jerusalem as the Messiah riding on a donkey amid cries of “Hosanna in the highest.” But he will leave the city as a criminal carrying his cross amid cries of “Crucify him”. Peter’s promise to die with Christ will give way to a triple denial. The friendship of Judas will turn into a kiss of betrayal.

This morning we joyfully honor Jesus as the Messiah, but we are also reminded of our sinfulness, our own ability for treachery and betrayal. Judas bent down before thirty pieces of silver. Peter bent down at the accusing words of a maid. Pilate bent down before the demands of a crowd.

“I gave my back to those who beat me.” True, as we heard in the Passion Narrative that was just read. Jesus was scourged. But what about “I shall not be put to shame?” If we understand shame as the Bible often does, as coming out the looser in a legal dispute, then ultimately it is true. The Resurrection on Easter is the definitive vindication of Jesus. He seemed to have been losing, even to have lost—what is more decisive than a capitol sentence being followed through with and then burial?—but in the end Jesus was not put to shame. 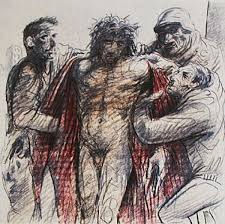 Shame is some form of dishonor where you would hope for honor and affirmation. It is being exposed as deficient in some way and thus deserving of rejection. Shame is a form of suffering. We heard from the Third Servant Song in the prophet Isaiah. On Good Friday we will hear from the Fourth Servant Song. There it will say, “it was our sufferings he endured.” The shame Jesus suffered, then, the undisguised dishonor and rejection and public humiliation, was really his, but also really ours: he bore our shame, for our salvation.

If it is true that Jesus bore our shame on the Cross for our salvation, it is because, as Paul says, he loved us and 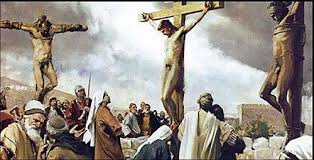 gave himself for us, for us in our deserved and even undeserved shame and dishonor. In almost all cases our real or imagined shame is based on a scale of values that we or convention have established—what counts as honor and what doesn’t. But by himself bearing our shame out of his underserved but freely given divine love for us, Jesus has overcome all value systems except his own. “It is not because you were sinless, or great, or strong, or healthy, but because I love you.” The Passion of Christ shows us, who receive it with faith, that we are desired by the ultimate of all standards, by the most beautiful of the sons of men. By this standard, all shame is defeated and falls away. And so, it is true, “I shall not be put to shame.”