Presentation of the Lord at Mississippi Abbey

Homily for Presentation of the Lord at Mississippi Abbey

Simeon says the child will be a “light FOR revelation to the Gentiles and glory FOR your people Israel.”  The light and glory are important in themselves. And “For” is an important word here because it is the way we are to situate ourselves before the important-in-itself. We are to be “for” it. And what we are “for” (our dominant intention) guides our way of living.

Jesus is brought to the temple to be dedicated and dedication is always for.  More specifically, He will be a LIGHT for. Indeed, we usually turnoff lights that are not needed for. Henceforth people will be known by whether or not they think this light—Jesus—needs to be on.

Jesus Christ is a light for human hearts. As light He gives life, sight, and knowledge. As a light for the heart He reveals how to value or determine worth. And the first to recognize this light are two who have no other competing light: Simeon and Anna. 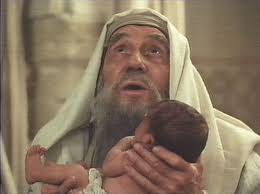 Both were living in the light of the memory of Israel’s liberation, God’s great act “for.” More to the point, they were living in expectation of the fulfillment of the covenant promises. Anna is a prime example here. We’re told that she had lived seven years (seven indicates perfection in scripture) in the marriage covenant. That was a life lived for. Since her husband died she had been living the Sinai covenant exclusively, praying in the temple day and night. Just as her marriage covenant was replaced by her devotion for the Sinai covenant, so she was able to see the coming of the new covenant in the infant and to announce this redemption to all who were awaiting it.

Israel in slavery was lost and had no meaning or purpose in life. Meaning and purpose do not come from a life where satisfaction (or lack of it) is the chef intention. Apart from value, the important-in-itself, they had nothing to live for; they were virtually dead. Then God revealed Himself and they felt chosen and cherished as a community, i.e. as “we”, as “us”. They 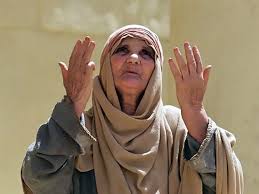 had a new life, a dominant intention; something to live for. Anna exemplified this as a profoundly personal experience which involved an exchange of love and a pledge of loyalty characteristic of marriage. Like in marriage, Israel, i.e., we, are to deepen the relationship with God as we—God and self—come to know each other better in the hardships of life. Thus we discover real value. That is the light that is revealed to us. That is how we are to use our freedom. We are to use it “for” what is of pervasive, enduring, and deep value. The Lord is to be loved exclusively because He alone brought us out of bondage.

I mentioned earlier that henceforth people would be known by whether or not they thought the Light—Jesus—needed to be on. Simeon said the baby Jesus would be a sign of contradiction that will reveal the thoughts of many hearts. With Simeon’s prophecy Jesus’ whole life of descent from the Father and ascent back to the Father, and His whole mission of making the Father known to humanity, forms the context for today’s event. Through Mary and Joseph He obeyed the Roman law and went to Bethlehem for the census, and obeyed Jewish law and went to Jerusalem for the Presentation. During His life He also paid taxes and went to the Jewish feasts. The law and the prophets thus bear witness to Him. Nevertheless, they thought He was a light that should be turned off. 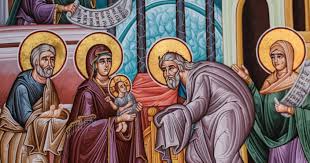 Adequate knowledge of truth requires a quite good intellect; adequate knowledge of value requires integrity of will. Self-interest prevents integrity of will.  It reveals the “thoughts of a heart” that is in bondage to self-satisfaction. It cannot be “for.” And it resents a heart that is “for.”  Yet it is His being “for” that frees us from that bondage to a life lived for mere satisfaction.

The light for revelation and the glory for the people are One Thing. The secret to life is One Thing. Only by abandoning ourselves to the ultimate value of God, as motivated by love for God, can we rightly order ourselves toward the lesser values of this world.  Being “for” is all an inside job.