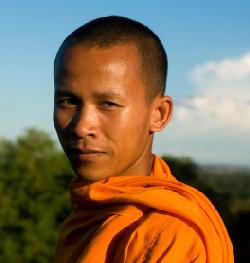 Fr. Raymond Brown tells the story of a Buddhist monk who was curious about Christianity. A priest gave him a copy of the New Testament, suggesting that he begin with the Gospel of St. John.

Later they met again. The Buddhist was puzzled and annoyed by the first line of John's Gospel: “In the beginning was the Word.” He said, “Why didn't John write, 'In the beginning there was silence'? You Christians have such a noisy God.”1

Yes, we do. God speaks to us through the prophets, and through his Son, the Eternal Word. The first great discourse of Jesus is the Sermon on the Mount, an introduction to Christianity.

Fr. Raphael Simon, a convert from Judaism and a Trappist monk of Spencer Abbey, who died six years ago, wrote about the influence that the words of Jesus had on him, especially today's gospel.

One day, when he felt a persistent anxiety and terribly fatigued, he picked up a New Testament and happened upon the Sermon on the Mount. He read: “Do not worry about your life, what you will eat or what you will drink; or about your body, what you will wear. … Look at the birds of the air; they neither sow nor reap nor gather into barns, and yet your heavenly Father feeds them. Are you not of more value than they?” (Mt. 6:25f). An overwhelming sense of peace flowed into his heart.

Previously, the name of Jesus only stirred up thoughts of resentment. But now he began to read the four Gospels with an open mind. When he reached chapter twenty in St. John's Gospel, at the scene in the upper room where Christ passes through the locked doors, and Thomas cries out, “My Lord and my God,” a great change took place in Raphael Simon's own heart. He writes, “I realized that I now believed, and that the loving Savior had passed through the locked doors of my heart. … My eyes and ears were opened and my heart melted as I discovered the lovableness of Jesus. He is indeed the Son of God.”2 He was baptized and entered the Trappists four years later.3

Yes, we have a noisy God who cries out to us: “Do not worry about your life … Look at the birds in the sky…. Are not you more important than they? … Seek first the kingdom of God… and all these things will be given you besides” (Mt. 6:33).