Saturday in the Third Week of Lent

Homily for Saturday in the Third Week of Lent

Luke tells us that the Pharisee “spoke this prayer to himself.” Not good. Thomas Merton has observed that the mother of pride is comparison. Jesus says that the Pharisee is comparing himself as more obedient than the tax collector. Comparative obedience can be a common source of division among religious types.

Obedience is certainly central to the God-Man relationship. St. Benedict says it should be rendered out of love. We may do well to think that “earnestly competing with one another” in obedience refers to personal zeal for submission to the Father’s will rather than obedience as a competitive sport or mode of political positioning.

This parable brings together several of Jesus’ teachings. Yesterday’s love Commandments are conspicuously missing from the Pharisee’s perspective. In the feeding of the 5,000 the disciples advise Jesus to “send the people away.” It is the work of Satan to scatter. Jesus is the voice of communion, of bringing people together. So, He tells the disciples, “Give them something yourselves.” Show empathy & compassion. 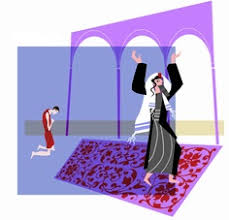 Jesus also teaches that “a household divided against itself cannot stand.” In a religiously-oriented community of adult men, obedience is not remarkable. Bad guys have to be invented. But why bring division into any community that is “truly seeking God”? Yet, that is what the Pharisee is doing with the tax collector in the temple.

In the light of the Love Commandments, Pope St. John Paul II would see the Pharisee’s comparison as contrary to personhood because it is an obstacle to the self-donation that promotes solidarity. John Paul notes that self-donation—a way of loving—seeks the good of the other and promotes solidarity by seeking it “for the others own sake.” At the same time, it thereby frees one of self and advances the Kingdom of God.

It is not hard to imagine that the Pharisee would teach the people something like, “Joe is a tax-collector. He is greedy, lustful, and dishonest.” The implication would be that non-tax collectors are never greedy, lustful, or dishonest. It is surprising how many people would assume that. So, Joe and those in his category are considered “other” and undeserving of solidarity.

There is a way of understanding the effects of comparison in this parable. Breathing is something most, including the Pharisee, do not give much thought to. In that way it can be like one’s consciousness of personal sin. It is different with the tax collector. If, when we were boys, we ever had the wind knocked out of us, we can empathize with the tax collector. His awareness of sin is like gasping for air. Trust me (and Jesus): it is those gasping for air “who need a physician.” The tax collector is undergoing conversion. His contrition makes him a faithful sinner, relying only on the mercy of God. He prays to God, not himself. Only the hard-hearted would find that suspicious.

Jesus says such separating attitudes that discount personhood does not justify a man. Living in the truth of one’s divided heart does. We are reminded that there is more joy in heaven over the tax collector’s repentance.

Saturday in the Third Week of Lent

Homily for Saturday in the Third Week of Lent 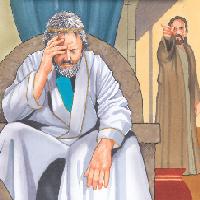 Repentance rings bells in heaven, like the repentance of the tax collector and even of kings! Remember King David who committed adultery and murder. When he was confronted by the prophet Nathan, the King repented saying, “I have sinned against the Lord.” He didn’t make excuses, or rationalize, or try to hide his sinfulness. He confessed. So Nathan replied, “The Lord has taken away your sin.”

When weighed down by the good fruit of repentance we are ready for the harvest.

A city boy, visiting his cousin who lived on a farm, had never seen a field of wheat. It was an impressive sight, fields of golden wheat ready for harvesting. But he noticed that in some places the wheat stood tall and beautiful, while the rest of the wheat was bent over. He asked his cousin, “What’s wrong with the stalks of wheat that are bent over?” His cousin

reached out and plucked the top of a tall-standing wheat stalk and then the top of one that was bent over. As he rubbed each of them in his hands the city boy saw that the tall wheat had almost no seeds in the pods, while the bent one was heavy with an abundance of good seeds for the harvest.

God delights in hearts heavy with the good fruit of repentance, not in those inflated with the emptiness of self-justification like the Pharisee.