Homily for Saturday in the Thirty-First Week of Ordinary Time

Today we honor our Blessed Mother under the title of Mother of Good Counsel. That was the name of the high school seminary I graduated from near Warrenton, Mo. It was a Passionist seminary. I spent two of the happiest years of my life there before being told at graduation that I would not be able to go on to novitiate because I was hard of hearing. They had so many vocations back in those days that they had to open a second novitiate and still weed out whoever they could.

That was a very hard experience, but eventually I, still a strong, church-going Catholic, enrolled at the University of Iowa and entered a very different world from that of the Passionist seminary. They differed around the idea of what matters most, of what was worthwhile. The young men of Iowa City had different ideas from the Church. As a young man,I found myself faced with a choice between two masters. Both wanted my heart, my conscience. Because of conscience I could see no way to serve both. I went with the one that offered community. That eased my conscience about leaving the church as “a code that you can live by.” It was not a smart choice. 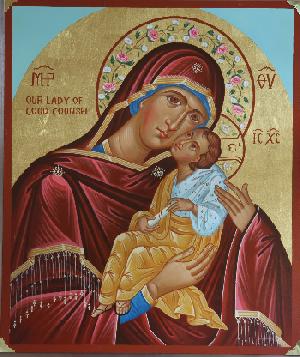 One cannot serve God and mammon. Some scripture scholars interpret “mammon” as meaning “that in which one trusts.” In other words, it is the code, the ethic one lives by. I like that interpretation. That’s how I remember it.

Jesus describes this choice between two masters as an interior traffic jam (I remember that, too!). He is calling us to true interior peace. In choosing a code or ethic to live by we are choosing who or what to love.Whom we trust, we will love. To trust and love there are two persons we must know: God and self. We are what we love. We become what we love. That makes love a dangerous thing. It changes your life. So be careful.