Jesus is posing a very serious question to us with this parable about the sower. “In what way does being a Christian affect the sort of person one becomes?” In other words, what is the significance of believing since that involves trust and confidence in certain principles of growth?

In the parable the seed is the same in all settings: it is the word of God. What differs is the receptivity. It is the heart that receives. The word of God contains principles of growth, but so, too, do other stories such as secular psychology. If one gives preference (i.e., trust & confidence) to another story, she will not “have ears to hear…and understand.” She will not be ready.

Let’s begin by looking at the rich soil, the optimal receptivity. There the word is embraced, i.e., accepted wholeheartedly and one gives herself to it and perseveres at living it. This means there will be a predictability about the way this person responds to the various situations she encounters. The rich soil is the affections, beliefs, dispositions, and intentions of the heart as formed by the kingdom’s principles of growth. First, the word affects her. She is aware of her need for guidance and direction in her life. Being affected moves her from indifference to caring. Thus, she believes the word she hears is not only true, but important. “Important” means it has great value in itself, independent of how it makes her feel. 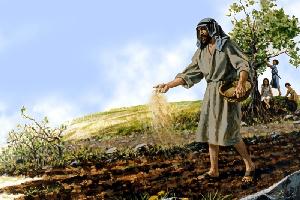 Because she believes in the inherent value of the word, she is disposed to conduct herself according to the word. A disposition is a readiness to act in a certain way. This leads to her forming an intention, a striving to achieve a certain goal: doing the word of God. This becomes the dominant intention of her life and all other intentions will be harmonized with it.

Then what happens when the seed or word falls on the hard-worn path? The heart is not affected. One doesn’t much care. There is a difference in believing. So the seed/word suffers two hazards: first, being trodden under foot. A path is trodden by many feet so the community one associates with greatly affects receptivity of the word. Feet symbolize activity so consequently there is no change in actions one takes. Then being eaten by the birds symbolizes continuing to listen to the stories of those untouched by the word. Their stories are about immediate satisfactions that “eat up” the delayed benefits of the kingdom. A community and the story it lives out are what form character. It affects one’s disposition to act in a certain way. The dominant intention of one’s life does not change so neither do the lesser intentions. Being a follower of Christ in a Christian community affects receptivity to the word and thus the sort of person one becomes. 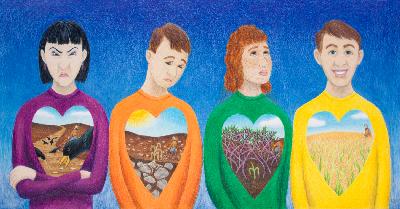 Then there is the rocky ground. Initially one is positively affected by the word. But belief in the importance of it is weak. There is a failure to embrace wholeheartedly. Faith cannot be half-hearted. When it is, one is subject to the temptation of the immediately satisfying. A disposition to sacrifice immediate gratification in favor of the intrinsically valuable does not develop. Thus no dominant intention develops and one’s life is lived as a series of disconnected episodes. Being a Christian makes one a person of integrity, constancy, and noble and purposeful direction.

“And some seed fell among thorns and the thorns grew with it…” The word does not affect one uniquely, but is merely another item of interest. Other interests might be peace of mind, reputation, or material wealth. What chokes the word is a failure to believe in it as the One Thing that matters most; that one most hopes in. Confidence & trust are scattered among many perishable things and fear of loss chokes off the word.One’s chief disposition is toward personal comfort. One’s dominant intention, her primary striving is for something finite, and all else is harmonized with it. Being a Christian, then, makes one the sort of person who has a solid foundation for facing the changing fortunes of life. Confidence & trust are placed in what endures. She bears fruit through perseverance. 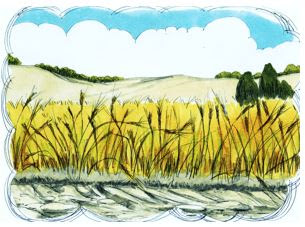 Let’s return to the rich soil. “In what way does being a Christian affect the sort of person one becomes?” Secular humanists claim the locus of the good is in the human. The Christian believes the good is located in God, the Father of Jesus Christ.  A follower of Christ, then, has a model and—even more—a source of power. The nutrients of the rich soil that is Jesus Christ (His affections, beliefs, etc) give one a principle of growth that guides a predictable way of living in an unpredictable world.

It is the personal experience of this power that gives one trust & confidence. Community makes it accessible. Christ gives her the power to embrace what is right, but perhaps hard to do. He does this by affecting the heart, making it generous and believing in the intrinsically good. With the heart thus ordered, one is disposed to self-giving. One’s life is guided by that intention.