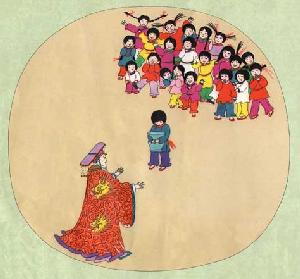 “Let your 'Yes' mean 'Yes,' and your 'No” mean 'No.” Once there was a young Chinese boy named Ping who was an excellent gardener. His flowers were always the exceedingly beautiful. Imagine how excited he was when the old Emperor called all the young people together and said, “Whoever grows the most beautiful flowers from the seeds I give you, will be the next Emperor.”

They each received a pot and seeds from the Emperor and went home. Ping watered the seeds, added fresh soil and fertilizer but nothing sprouted. When it was time to bring the pots and flowers back to the Emperor, Ping had nothing but dirt, while all the other pots were filled with the most beautiful flowers. He was ashamed and humiliated, and started to cry when the Emperor carefully examined each one and then stopped in front of Ping's empty pot. “The seeds wouldn't sprout,” Ping said. “This empty pot is all I have to offer you.” The Emperor smiled and said, “The seeds I gave everyone cannot grow. You are the only honest one here. You will be the next Emperor.”1

“Let your 'Yes' mean 'Yes,' and your 'No” mean 'No.” This golden rule of honesty applies to all we do and say. But it applies especially and above all to our Baptismal Promises: let our “Yes” to God be “Yes,” and our “No” to Satan be “No.”
“Anything else is from the Evil One.”