Homily for the Seventh Sunday of Easter at Mississippi Abbey

During World War II, Hanna and her husband, Solomon, were taken with their two sons, Jacob and David, to a concentration camp. Anyone who could not work was executed. Their youngest son, David, wore a brace to support a deformed leg. When they arrived at the camp they were separated. That evening Solomon found his oldest son and asked if he knew where Hanna and little David had gone. Jacob, in tears, replied, “The soldiers took him to the ovens and Mother went with him so that he would not be alone.”

At his ascension Jesus promised that we also would not be left alone, “I am with you always, to the end of the age.” The invisible God whom holy Job wanted to see with his own eyes answered Job's prayer when he took on our flesh in Mary's womb and became Emmanuel, “God with us.” The distant landlord who seemed to have abandoned his vineyard, Israel, sent his Son to be with us saying, “They will respect my Son.” The absent God who was mocked by taunters in the psalms saying, “Where is your God,” was lifted up on a cross for all to see. The ascension of Jesus was not the end of his presence with us, but a new way of being present. St. Augustine writes, “You ascended before our eyes, and we turned back grieving, only to find you in our hearts.” 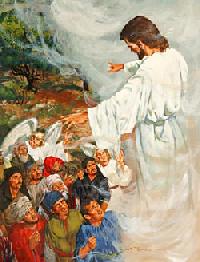 The four gospels do not end with Jesus' absence after the Ascension, but with his continuing presence. Matthew does not even mention the Ascension. His gospel ends with Jesus saying, “I am with you always, to the end of the age.” Mark writes that Jesus was taken up into heaven, but then he adds, “The disciples went forth and preached everywhere, while the Lord worked with them and confirmed the word with signs.” Luke ends his gospel with Jesus ascending into heaven in order to send the promise of the Father upon us, his own Spirit. The last scene in the John's gospel is of Jesus saying to Peter and to us, “Follow me.” Christ became more present in the world after his ascension than after his birth in Bethlehem. He continues his presence with us not just in one place, but everywhere: in the Eucharist, in the Scriptures, in our hearts and in each other. 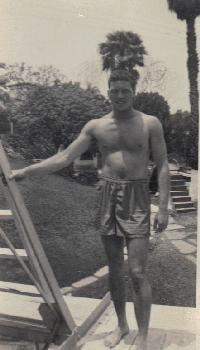 As Gerard Manley Hopkins expresses it, “…Christ plays in ten thousand places, Lovely in limbs, and lovely in eyes not his.” Like Hannah, the wonderful Jewish mother who chose to die with her son so he would not be alone, Jesus walks with us through the passageway of death so that we will not have to go there alone. “I am with you always,” he said, “to the end of the age.”

Yesterday we buried our brother, Fr. Thaddeus, who was 86 years old. Johnnie was a handsome young Marine in the Second World War after which he came to New Melleray. In his file we found a telegram that he sent to his mother from the Panama Canal when his ship was on the way to China. She could not be with her boy sailing into harm's way, but she knew Jesus was with him. And when he returned home unharmed, Johnnie knew that for the rest of his life he wanted to walk with Jesus until the day they would sail together through the narrow passage of this life to the wide open spaces of eternal life. As he was departing from this life, I imagine Fr. Thaddeus sent a text message to his relatives and God the Father saying, “I am coming to you.” 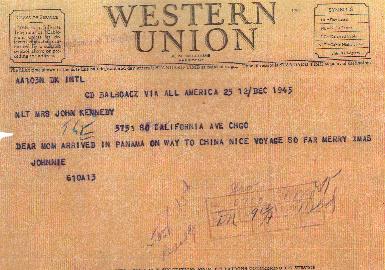