Homily for the Sixteenth Sunday in Ordinary Time at Mississippi Abbey

Homily for the Sixteenth Sunday in Ordinary Time at Mississippi Abbey 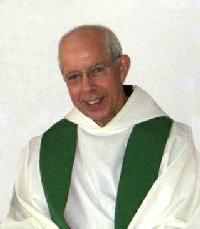 One day the father of a large family came home from a hard day of work in the hot sun on a construction site.  He opened a can of beer, settled into an easy chair and began reading the evening newspaper.  One of his kids interrupted him and asked for money to repair her bicycle.  A little later another daughter said, “Dad, would you help me with these math problems?”  After that, he no sooner picked up the paper again when his son came along and asked to use the car that evening.  He handed over the car keys and tried to settle down.  But not for long.  His youngest girl ran into the living room and tugged at his sleeve, saying, “Daddy, Daddy!”  Feeling annoyed by so many interruptions he said a bit roughly, “What do you want?”  She replied, “Daddy, I don’t want anything except to sit in your lap and love you.“

When Mary sat at the feet of Jesus with the loving, attentive heart of a young disciple, she gave him something more important than food for his body. It was like the day Jesus spoke with a Samaritan woman by Jacob’s well and afterwards told his disciples he had food to eat that they did not know about.  At Bethany, Mary listens with love and Martha loves by serving.  Martha was doing what culture expected of her.  Mary wasn’t. 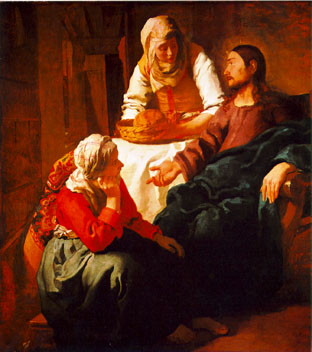 This is a story about one of those revolutionary moments in the life of Jesus when he overturns the customs of centuries.  Like the day he broke with Jewish customs by speaking with a Samaritan woman and opened the way of discipleship to foreigners.  Or, the day he overturned dietary laws by declaring all foods clean.  Or, the day he commanded his disciples to love their enemies, not to hate them.  It was not the custom for women to sit at a master’s feet, to be a disciple.  Jesus changes that, “Mary has chosen the better part and it will not be taken from her.”

Now we’re all called to sit at the feet of Jesus with listening love at one time, and to hand Jesus a cup of cold water with serving love at another time. Even contemplatives have to go to work every day, as you know so well.

But listening with love can get crowded out by troubles and anxieties about all kinds of things when we are attending to the necessities of life. So, Jesus says elsewhere, “Don’t worry about your life and what you will eat, or your body and what you will wear” (Lk 12:11-24),”Don’t become weighed down by the anxieties of daily life” (Lk 21:34-36).  Rather, “Receive the kingdom of God like a little child” (Lk 18:17).  It is the privilege of children to love without worrying about the necessities of daily life.

Once the chief executive officer of a large corporation was leading a business meeting.  He talked about learning from children.  He said, “I became really annoyed at my very young daughter one day and decided to impose an Army practice to teach her respect. I commanded her to begin and end everything she said with the word ‘Sir.’ ‘Sir, may I go out and play, Sir?’  ‘Sir, my brothers are picking on me, Sir.’  ‘Sir, do I have to eat these carrots, Sir?’  This little routine was working so well I began to forget I wasn’t an officer and she wasn’t a soldier, until one day when she was in the back seat of my car, she put her little arms around my neck and said, ‘Sir, I love you, Sir.‘ “

We are all called to be disciples, listening to Jesus’ words at one time and serving the needs of his body at another time.  But what he wants most of all is to hear us say with the simplicity and lightheartedness of a child, “Lord, I love you, Lord.”