“Those who love me keep my word, and the Father will love them, and we will make our home with them” . “I will come and eat with you and you with me” .

An overworked businessman, Nicholas Cominsky, stared at the formal invitation he had just received. He thought the guys at work were pulling one of their practical jokes when he read, “You are invited to dinner with Jesus of Nazareth at Milano’s Restaurant – March 24th – Eight o’clock.” He decided to play along with their joke and showed up at the proper time. The maître d’ led him to a table where an olive complexioned man with bushy eyebrows and deep set eyes stood up and firmly grasped his hand. “Nick,” he said, “I’m Jesus.” Nick replied, “Excuse me, but am I supposed to know you?” Jesus answered, “Yes.” Nick countered, “But I’ve never met you before.” Jesus replied, “That’s true.” Nick became nervous. He bolted for the men’s room where he expected to see the guys from work hiding behind a lattice laughing at their latest joke. They weren’t there. “Enough of this,” he thought, “I’m leaving.” He went back and told the stranger he was going home to his wife and daughter. But Jesus replied, “Your wife, Mattie, has gone to a movie with her friend Jill, and she got a baby sitter for your daughter, Sara.” It was true, but how did this phony know that? Jesus said, “Why don’t you set aside your disbelief for a while and continue as if I’m Jesus?” Nick’s curiosity was aroused, so he stayed. The rest of this short story, called “Dinner with a Perfect Stranger,” by David Gregory, is a delightful conversation between a modern day Nicodemus and a contemporary Jesus. The author explores what it would be like?

Nick starts out by saying, “Tell me about Mary and Joseph.” Jesus jumps right in, “Joseph was a good father. His shop was next to the house. When he knew I was coming he always tried to finish his work before I could get my hands on it. At eight years old I wasn’t exactly a master carpenter.” Nick thinks, “Boy, this guy is a professional actor.” Then he asks, “[Was] it hard growing up with such a revered mother?” Jesus chuckles, “She was hardly revered. More like an outcast for conceiving a child before the time of the wedding. But her sense of humor kept her going. She never let me live down my remark that I had to be about my Father’s business. Someone would come looking for me and she would say, ‘I don’t know where he is; about his Father’s business, [I suppose].'”

And so they passed the evening talking about family relationships, world religions, politics and the afterlife. Nick listened to Jesus tell his own story and how his Father made the most difficult Lover’s choice: giving up his only Son to save the world. Nick was profoundly moved by this dinner conversation with Jesus. When the waiter appeared at the end of the meal with the black leather bill holder and placed it on the table, Nick took hold of it. But Jesus stretched out his arm and put his hand over Nick’s, saying, “This is on me.” The cuff on Jesus’ shirt sleeve pulled back and Nick saw a large puncture scar on Jesus’ wrist. Seeing that wound Nick began to believe and asked hopefully, “Will we get together for dinner again?” Jesus replied, “That’s up to you.” 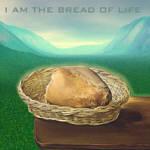 Dinner with a Perfect Stranger is an enviable story about sharing a personal, intimate, face to face dinner with Jesus. But is it really so enviable? What if Jesus had chosen to show us his love by having one meal each day with a different person? It would take millions of years for each one of us to have a turn!

Fortunately, that’s not the way Jesus comes to us. What he does is so much better. He gives himself to us in the Eucharist so that everyone can sup with Jesus, even daily. He comes not as a perfect stranger, but as a friend, a lover. He does not invite us to a restaurant but wants to be invited into our hearts as a home: “Those who love me will keep my word, and my Father will love them, and we will come to them and make our home with them. … I will come and eat with you and you with me.” The love story that God writes is “Dinner with the Perfect Friend” every day. And now you are invited to sup with Jesus.