When we think of a king, we think of someone who is a human being who is rich, powerful, of high status and commands respect. We need to be careful about understanding Christ the King this way. What the world esteems highly is not esteemed by God. As Jesus told Pilate, “My kingdom is not of this world.”

As a young man I was easily charmed by whatever was currently in fashion. It captivated me. Jesus, the king, is not charmed by such things. He is grounded in authentic and enduring values and calls us to be the same. He calls us to be free. How does that work?

He emptied Himself. He was attached only to the will and plan of His Father. That’s how that works.

The emptying seems to be the basis of His kingship. He was the Son of God, second person of the Trinity, and maker of the universe. Then He gave it all up. His first move was to renounce His status; not His love and commitment …His status. This is emphasized in the gospel today when the rulers say “Let him save himself if he is the Christ…” And a fellow-sufferer says, “If you are the Christ, save yourself and us.” He indeed had the status they attributed to Him, a status that would have impressed them as showing He was a king. But instead He emptied Himself for the sake of… 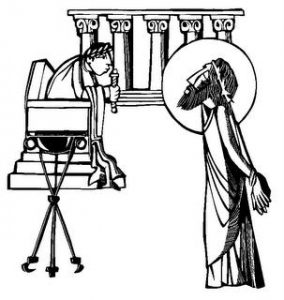 For the sake of…. Pope Benedict XVI said that “For” is another name for Jesus.  It is what a king should be; it’s what Jesus is. “For” is the essence of being a human in the image and likeness of God. It’s the essence of the imitation of Christ. One’s life is not about self. He was attached only to the will and plan of His Father.

The will and plan of the Father was the highest value that He, or anyone, could know.  And He responded to it from the deepest part of His heart. That’s what a person does when he or she lives “for the sake of…” Responding from the deepest part of the heart means we are devoted to it. Such devotion transforms our character. Devotion unifies a person within him or herself.  That transformation is experienced not as an achievement, but as the reception of a gift. It is commonly given through an exemplar.

Sirach tells us that “the officials and all the citizens will be like their ruler.” (10.2) The ruler is the exemplar. He unifies the people among themselves. The ruler we acknowledge today is not recognized by His wealth, power, or status. He is recognized by the way He relates to the man on the other cross who wanted to be remembered. In his own agony He thought of the good of that man. He did this because He had from the beginning decided to be a self-gift. The pardon and mercy which He dispensed to that man could only be given by a king. The pardon and mercy unified the man within himself and with other followers and ultimately with God. The pardon, the mercy and the unity are functions of a king. They are how we recognize Jesus Christ as king. That is the example we are to follow.