Solemnity of Christ the King at New Melleray

Returning from my first trip to Europe a few months ago, I realized how American I really am, and I appreciated more that you people, fellow citizens of these United States of America, are people whom I identify with; people I love. Which is not to say, I always understand you — and just recently, I’ve had more difficulty understanding you than usual. One thing I have a hard time figuring out is your taste in movies. Mel Gibson, for example, one of your favorite actors, makes a movie called “Lethal Weapon” which is a huge success, and for years afterwards makes the same movie over and over and over again, sometimes with different titles, but it’s always the same movie: he’s always fighting a battle to the death against unjust aggressors. And God help the bad guy who gets aggressive with Mel Gibson, because before the movie’s over, that man’s going to get blown to smithereens! You line up by the thousands to watch these movies, and make Mel Gibson a rich man. Then one day, Mel Gibson decides to direct his own movie. Another sequel to “Lethal Weapon”? No, he decides to make a movie—about Jesus. Actually, he says, this is THE movie he’s secretly always wanted to make; a movie that would show people all that our gentle Lord suffered for our salvation.

And so following a huge promotional campaign, “The Passion”, is released, in which over the course of two hours, we watch Jesus arrested on false charges, indicted, condemned to die, stripped naked in front of everyone, beaten to a bloody pulp, taunted, spit on, and crucified . . . in reaction to which Jesus does—absolutely nothing. He doesn’t fight back, he doesn’t protest, or even attempt to defend himself. He stands there mute before false accusers; passively receives beatings, evidently resigned; loving and forgiving his enemies even to his last breath and then he dies. 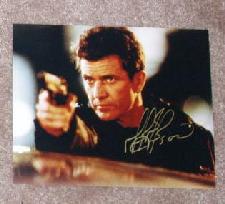 Not exactly a sequel to “Lethal Weapon”. Surely this movie that glorifies passive resignation to unjust aggressors must have been a flop at the box office. But no, it turns out, it might be Mel Gibson’s most successful movie, because you, fans of “Lethal Weapon,” lined up by the tens of thousands to spend two hours watching Jesus patiently and lovingly endure the violence of his enemies, and were evidently deeply impressed by what you saw.

Mel Gibson, it is said, had a conversion, which helps explain why he made this movie. But how to explain you—you thousands of satisfied moviegoers whose reception of “The Passion” was more enthusiastic than the one you gave “Lethal Weapon?” Did you have a conversion too? I’m inclined to think you did—but there is conflicting evidence. At the same time, you were so intently watching Mel Gibson’s “The Passion”, you were keeping up with reports on the war in Iraq, whose objectives and progress, the polls suggest, most of you support. But this war was initiated with the cry: “We will take justice to the enemy! No aggressor will attack us or our interests—and go unpunished!”. . . sentiments that are a little difficult to reconcile with the message of Mel Gibson’s “The Passion”, which you so warmly commended. Were you not converted after all? Did you—convert twice?

It is my impression that we Americans are still in the process of converting to the gospel of Jesus Christ, like the people featured in today’s gospel reading, 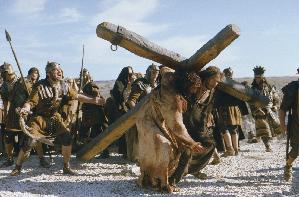 who stand beneath the cross watching Jesus die and shout at him: “Save yourself!” You are supposed to be a King—the Messiah! You saved others; save yourself!” These are the voices of the unconverted, people who may have actually despised Jesus. Why? Because, in our world, that man is universally despised, who being unjustly attacked, does nothing to defend himself. But it is this man, despised by the world as an abject failure, who we celebrate today as “King,” and there are angry voices deep inside us that rise up in protest.

Jesus is taunted in our own day, as he was on the cross, and so are we his followers. A Christian father is taunted by these voices: “You are master of this house! Why do you let that teenager rule the place? Show him who’s in charge here!” A Christian teacher hears the same voices taunting her: “Why do you put up with such nonsense? Show these kids what happens when they show disrespect—to you!” An abbot, struggling to maintain discipline in a monastery, hears the same voices taunting him: “You’re the abbot! Why do you suffer fools to talk back to you? You are Christ in this monastery! Show them who’s boss!” 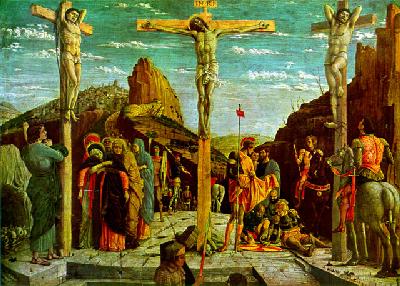 Brothers and sisters, on this Feast of Christ the King, Jesus Himself speaks to us—from the cross. As our Lord, as King, he says to us gently and with complete authority: “Follow me. Suffer with me for the sake of peace and reconciliation and you will all together be with me today in Paradise.” But there are other voices coming from a darkness deep inside us competing with Jesus’ voice. The same voices that taunted Jesus on the cross so long ago are today, taunting us as a nation: “Come now, you devout nation—famous for deciding elections on the basis of your “moral values!” Come, you devout nation of “evangelicals,” who acclaim as your “King” the son of a carpenter, and tell us: do you intend to follow the example of your King? Is it your wish to die, for the cause of peace and reconciliation, as did your King? He chose to be crucified rather than effect justice through violence, but you take up arms and say: “I will bring justice to the enemy!” Will you indeed? Oh, show us—show us you will! He called Himself the “Lamb of God” You call yourself—”Superpower”! Are you—”Superpower”? You whose proud twin towers lie in ruins before the eyes of the world? Oh, show us you really are—”Superpower”! Show us you are! Come down “Superpower”! Come down from your cross of shame! Let cowards be reconcilers! Save—yourself!”