Solemnity of Pentecost at Mississippi Abbey

Once upon a time there was a woman in the glens of Ireland who had an only son. He was a proper lad, very fine to look upon. His eyes were bright blue-like the morning sky at sunrise, and when he spoke his voice was like music. Girls watched him smile, and found there was no heart left in them. His equal was not to be found among the isles. All this he was to his mother and much more. He was her dawn, noonday, and evening tide. But then a war came and he fell. She died, too, not her body, but her heart. There was no end to her grieving. At last the Spirit of God, the Comforter, came to her and offered ways to heal such a wound. First he offered the gift of forgetfulness-but she would have none of that. She never wanted to forget the loveliness of her son’s face or the cheerfulness of his heart. Next the Holy Spirit offered her the gift of another child. That would be wonderful, but her heart would still bleed for the one she lost. Finally, the Comforter offered her the extraordinary gift of having her son back. “Yes,” she cried, “I want him back.” The Spirit agreed. Suddenly, the heavens opened and she saw her boy in an ecstasy of happiness, his face was radiant like the sun itself, shining so intensely she could not see what he was seeing-the vision of the Father’s infinite goodness pouring into his Son, and coming back to him with infinite love in the embrace of the Holy Spirit. The body of her boy was arched like a bow pointing upward in the sky, his heart was like an arrow soaring into the midst of God’s own happiness. The arms of God’s love were wrapped around him, cradling her son with a tenderness she had never dreamed of. Then she saw an angel approaching her son to bring the lad back to her. “Wait!” she cried, “Let him be. Now I know it is I who must come to him, not he to me.” The Holy Spirit said to her, “But, your heart is still bleeding.” “Let it bleed,” she replied, “it only bleeds for me. He is where I want him to be, his happiness in your arms is my consolation. I will feel his absence, and I want to miss him. But I do not want to take his happiness from him. Someday I will be with my son in your embrace. I can wait.” That day the woman went outside for the first time since her boy was buried. As she passed along the country road and greeted her neighbors, they said to one another, “Did you see her eyes? They are bright blue, like the morning sky at sunrise, and her voice, it is like music in the air.”

Earth is not our homeland, God is. We have received the upward call in Christ Jesus to be like that Irish lad embraced in an ecstasy of happiness. That is our destiny. It is better to suffer the loss of all things on earth rather than lose the gift of the Holy Spirit who makes us partakers of the divine nature and proclaims in our hearts that “Jesus is Lord.” 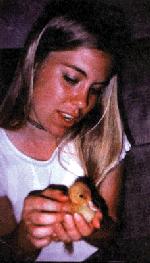 Five years ago a terrible tragedy swept through the halls of Columbine High School in Littleton, Colorado. One after another students were killed or wounded. One of the two boys with weapons pointed at a group of students and said in a threatening voice: “Do you believe in Jesus Christ?” There was silence. Then a girl raised her head, looked at him and calmly said, “Yes, I believe.” He shouted, “For WHAT?” and shot her. That moment of silence is especially revealing. It means she had time to reflect and then speak from the Spirit in her heart when she gave witness in the face of death that Jesus is her Lord. Her name was Cassie Bernall. She was an attractive 17 year old high school junior with long blond hair. Two years earlier Cassie abandoned her dabbling in the occult and dedicated her life to Christ. Her brother found a journal in which she wrote a few days before she fell: “Now I have given up everything else. I have found it to be the only way. To really know Christ, and to experience the mighty power that brought Him back to life again, and to find out what it means to suffer and to die with him. So, whatever it takes I will be one who lives in the fresh newness of life of those who are alive from the dead.” The Spirit of God was the mighty power within her, giving her strength to give witness, to suffer and to die so that she could experience the newness of life of those who share the embrace of God. 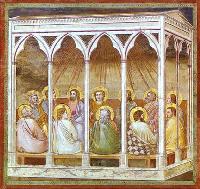