Solemnity of Saints Peter and Paul at Mississippi Abbey

Humility is the art of being human when the human is clear about what matters most. Fr. Michael pointed out how differences in temperament can result in different ways people are humble. It is shown in the different ways in which they show awareness of God as what matters most. This is shown when one’s self-worth is grounded in God and His will for one. This is what we see in the lives of Sts. Peter and Paul.

Peter shows it when he kneels before Jesus and says, “Depart from me…”; when he drops his nets and follows Jesus; and when today he professes that Jesus is “the Christ, the Son of the living God.” Peter is living in the truth. He is giving “an emotional and passionate assent and commitment” to this truth, learned from the Father. This source of his personal worth will guide the rest of his life.

St. Paul’s Damascus road experience has a similar effect in shifting his source of personal worth. He was formerly an accomplished and respected leader. He became someone who endured incredible hardship for the sake of the Name. For both men it all ended in their murder. They knew it would end that way and they kept walking toward it. 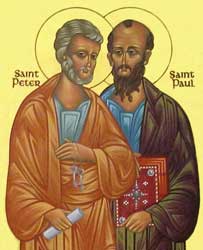 As with Jesus, the humility was in the heart. When the very center of the self is deeply affected, (as happens, for instance, to a young person when he or she falls deeply in love for the first time), one’s whole way of thinking about the world, as well as one’s whole way of feeling it, is profoundly and permanently altered. The person we were before has, to some degree, ceased to exist, and so has the world we used to live in. (I remember this happening when I walked out of a movie theatre and thought my “One Thing” might be entering a monastery.)

The self is affected; the experience is called “affection.” It is the affection in the heart of Peter and Paul that we celebrate today.

Affections, such as motives, desires, and preferences, compete with ones understanding for priority in deciding how to live. Our wills are attracted to our greatest good and perception of that good is influenced more by affections than thought-out judgments. Our monastic day is organized around cultivating affection for Jesus Christ and His Father so that it has priority.

What affects us moves us. It makes us act. Duties make us act. Prohibitions make us refrain from acting. Everything else we do is permissible and up to one’s choice. We choose to act for a reason. It is that reason, that affection, that value one pursues that makes us respond to Jesus Christ. It is the orientation of the heart.

It was the reasons, the movement of the heart that brought each of us here. The gospels and the Rue of Benedict helped us do what a follower should do by giving us a story and practices to live out in a community. They thus organize our world ahead of our actions. Their purpose is not to help us perform well for political positioning. It is to allow the affections of Jesus Christ for the Father to have priority in our hearts.