Solemnity of Saints Peter and Paul at Assumption Abbey

In one of the Peanuts comic strips Lucy tells her younger brother, Linus, to change TV channels. Feeling annoyed, Linus snaps back, “What makes you think you can walk right in here and take over?” Lucy holds up her fist and says, “See these five fingers. Individually they're nothing, but when I curl them together like this into a single unit, they form a weapon that is terrible to behold.” Linus replies, “What channel do you want?” Then turning away, he looks at his limp fingers and asks, “Why can't you guys get organized like that?”

In unity there's strength. Among Aesop's fables there's a story about a father whose sons were always fighting among themselves. One day the father asked them to gather an armful of sticks. After tying the sticks together into a bundle he said, “Break it in half.” Each son tried with all his strength, but not one of them could do it. Then taking the bundle apart he gave a stick to each of his sons. “Now,” he said, “break your sticks in half.” And they all did, easily. Their father said, “My sons, if you are of one mind, and unite to assist each other, you will have a strength that none of your enemies can break. But if you are divided among yourselves, you will easily be broken.” 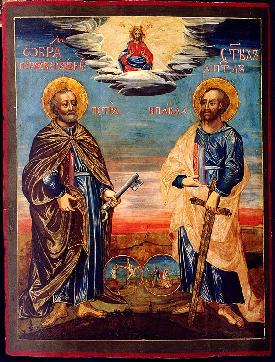 In unity there's strength. Today we celebrate our unity as Christians with two great but very different apostles, St. Peter, a humble fisherman who became the rock on which Christ founded his Church; and St. Paul, a converted persecutor who became the most prominent witness to Jesus to the Gentiles. Encouraging unity among converts, St. Paul writes, “ … be of the same mind, having the same love, in full accord with each other. Let each of you look not to your own interests, but to the interests of others” . A good Christian man who was an executive “headhunter,” someone who recruits Chief Executive Officers for large corporations, told this story. “When I interview a potential executive, I like to put him at ease. I offer him a drink, take off my coat, undo my tie, throw up my feet and talk about baseball, football, family, whatever, until he's completely relaxed. After he's comfortable and disarmed, I lean forward, look him square in the eye and ask, 'What's your purpose in life?' It's amazing how these great men fall apart at that question and stumble all over themselves.” Then he told about a recent interview. “I had the man all relaxed, drink in hand, feet up on a soft ottoman, talking about the Chicago Cubs. I leaned forward and said, 'Bob, what's your purpose in life?' He replied without blinking an eye, 'To go to heaven and take as many people with me as I can.'” The headhunter said, “For the first time in my career, I was speechless.” Here was a contemporary Christian who had the apostolic spirit of St. Peter and St. Paul, looking not only to his own interests, but to the interests of others, to building up the body of Christ. Like St. Paul this man could say, “I want to be all things to all people that I might by all means save some” .

We are stronger Christians when united together than we could ever be alone. But our unity is not only a way to be stronger. It is the only way to be saved. The unity between Peter, a natural leader, and Paul, a converted persecutor, is much more than being of one heart and soul in their love for Christ. It is about a saving union with God's own divine life in a saving unity with all other Christians. Peter and Paul could not be saved alone, like branches cut off from the vine, or like fingers cut off from the hand. There is no salvation alone, cut off from Christ's body.


What is this saving unity that we have with each other? Why can't we be saved alone? Why can't we go to God directly without being united with others?

Because our destiny, our purpose in life, our eternal happiness is participation in God's own divine nature. And there is only one divine nature. We share in it together or we don't share in it at all. Jesus prayed, “Father, … may they be one as we are one, … As you, Father, are in me and I am in you, may they also be in us. … The glory that you have given me I have given them, so that they may be one, as we are one, I in them and you in me, that they may become completely one” . St. Peter, filled with grateful love, writes, “His divine power has given us everything … [He has] called us to his own glory and goodness. … he has given us … his precious and very great promises, so that [we] … may become partakers in the divine nature” . And St. Paul, filled with the same grateful love, writes, “Blessed be the God and Father of our Lord Jesus Christ, who has blessed us with every spiritual blessing in the heavenly places …. He destined us for adoption as his children through … the glorious grace that he freely bestowed on us in the Beloved, that he lavished on us, … to gather all things in him” . It is only in our union with Christ, with Peter and Paul, and with all other Christians, that we are saved, and divinized, and enter into eternal happiness.

When our beautiful church of New Melleray was being renovated in 1975, we received a small stone from our monastery in Ireland, and we put this piece of black granite rock into the West wall of our church underneath the Paschal Candle, as a sign of unity with our monks in Ireland. In a similar way, at every Mass, just before Communion, the priest breaks off a small piece of the host and drops it into the chalice as a sign of our unity with the whole body of Christ, with our bishop and the local Church, with all Christians everywhere, with Peter and Paul, and with all the angels and saints in heaven.

You see these five fingers. Individually, cut off from the hand they cannot survive. But united together on one hand they share a common life. They are a living sign of our union with each other sharing divine life in the palm of God's hand, and that is something awesome to behold!