One day, a very long time ago, in the monastery where St. Benedict was abbot, the brothers were building on an addition to the monastery, and accidentally dug up a little bronze idol—one of those little “false gods” that look so cute to us today, like little dolls. Not knowing what to do with the thing, and anxious to get back to work, they set it on a shelf in the monastery kitchen. A few minutes later, they were horrified to see the kitchen completely engulfed in flames. Grabbing buckets, the terrified brothers began hurling oceans of water on the fire which only grew, and spread, and seemed to roar, and twist in it’s fury, and grow hotter and hotter, until the brothers finally completely lost their wits and began running in circles shrieking and crying out in desperation. St. Benedict heard the shouting and rushed to the kitchen. The scene he discovered when he got there was about the strangest thing he had ever seen in his life. The kitchen was not on fire. There was no fire. The kitchen was intact, by all appearances the same as the last time he’d seen it—there wasn’t so much as a flickering flame in sight;only a dozen or so brothers shouting “Fire! Fire!”, yelping and screaming and tripping over each other; hurling water against the walls and at each other; very nearly drowning themselves in their confusion; quite out of their wits—and no fire. 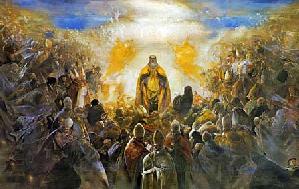 What distinguishes Benedict from the other monks in this story is that Benedict can see. Benedict can see what is and what is not. The brothers see what is not and so, they don’t know where they are or what is happening around them. They can’t see. Later, near the end of his life, this superior vision of Benedict, this ability to see, will be perfected, gloriously in a moment. As an old and venerated monk, at prayer one night, Benedict will see everything. Everything that exists in the world will be shown to Benedict with perfect clarity in one single unifying beam of light. He will see everything that is. How can that be? St. Gregory, telling the story, explains: for someone who sees God, all of creation, the whole created world looks very small by comparison. The interior vision of God given to a holy soul, expands the soul, makes the soul larger and larger so that it is placed above the world and the whole world easily fits inside it. When your soul has grown so big that the whole world fits inside it, then your eyes are opened and you see, you can see everything!

On the feast of our holy Father St. Benedict, I would invite you, brothers and sisters, to ask yourself, in all honesty, in light of these stories about St. Benedict, how many stories in the paper and on the nightly news, how many pieces of “breaking news” you’ve come across, might actually be “kitchen fires”? How many contemporary controversies, crises, and fiery debates are really just frightened and confused people throwing buckets of water at the walls and at each other, tripping over themselves trying to put out a fire that, maybe, just maybe, isn’t there at all? 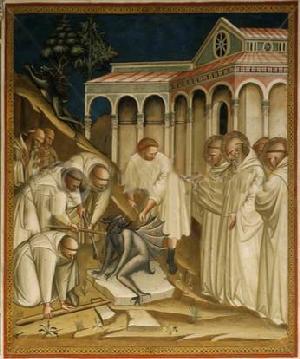 You will say all right, maybe some of the these fires exist only in our imaginations, but there are fires out there. The attack on the World Trade Center that initiated two wars was not a figment of our imagination. The sexual abuse of children by priests is not an apparition. It happened. The financial crisis that is causing unimaginable misery all over the world is not a dream. The awful incident at Bellevue, Iowa, on the fourth of July, that turned a beautiful family holiday into a nightmare with two horses in a parade gone berserk, killing a woman and trampling a couple of dozen innocent children, this we did not imagine. What light can St. Benedict shed on these tragedies and especially, the darkest dimension of these tragedies: the suffering of innocent children?

St. Gregory tells of how, on another day, the brothers at Benedict’s monastery were building a wall. Satan, infuriated by the progress the monks were making, went over and knocked over the wall, and a young boy was crushed beneath the heavy stones; his body hopelessly mangled and many of his bones broken. Benedict instructed the brothers to lay the dying boy on a platform in his cell where the holy man began to pray over him with an intensity, the author says, quite unlike anything anyone had ever seen him manifest before. Within an hour, the prayed for miracle was granted. The little boy rose from his mat restored to health, invigorated and eager to get back to work. The insult Satan had hoped to inflict on Benedict was returned to him when, later that day, the little boy was seen once again cheerfully at work building up the house of God. 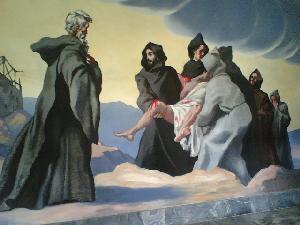 Not all suffering children are the beneficiaries of a miracle brought about by a saint. St. Benedict is not able to make right all the wrongs perpetrated against innocent children in our sin infected world. What this story offers us is light; it affords us a vision; a glimpse of reality from God’s point of view, the vision of a holy man. Imagining the boy happily engaged again building God’s church, we are given a peek at reality illumined by God’s love and providence. Looking at the boy, we become, for a moment, visionaries ourselves, marveling at the vision of God and of life as God wishes it to be, and seeing God as He is, and the world as God intended it, the whole world and all its tragedy seems to fit easily inside God; inside the light and love that is God. 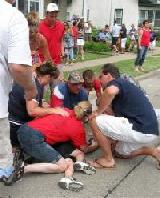 Thanks to portable video cameras, we watch all sorts of things these days. The moment of horror in Bellevue, inevitably, was caught on video tape, and you can watch it on the Internet. The camera allows you to watch the moment the horses panic and veer off away from the parade float toward the sidewalk where the children are gathered. You can see the carriage lurch; you can watch the terrible details of the tragedy begin to unfold. What are you watching? Is it a fire in the kitchen? What is the video showing you—that the whole world is just one great conflagration of meaningless suffering?

If you showed the video to St.Benedict, what would he see?