Solemnity of the Holy Trinity at Mississippi Abbey

Once upon a time there was a woman in the glens of Ireland who had an only son. He was a proper lad, very fine to look upon. His eyes were bright blue — like the morning sky at sunrise—and when he spoke his voice was like music. Girls watched him smile, and found there was no heart left in them. His equal was not to be found among the Isles. All this he was to his mother and much more. He was her dawn, noonday, and evening tide. But then a war came and he fell. She died, too, not her body, but her heart. There was no end to her grieving. At last the Spirit of God, the Comforter, came to her and offered ways to heal such a wound. First he offered the gift of forgetfulness, but she would have none of that. She never wanted to forget the loveliness of her son’s face or the cheerfulness of his heart. Next the Holy Spirit offered her the gift of another child. That would be wonderful, but her heart would still bleed for the one she lost. Finally, the Comforter offered her the extraordinary gift of having her son back. “Yes,” she cried, “I want him back.” The Spirit agreed. Suddenly, the heavens opened and she saw her boy in an ecstasy of happiness, his face was radiant like the sun itself, shining so intensely she could not see what he was seeing-a vision of the Father’s infinite goodness pouring into his Son, and flowing back to him with infinite love in the embrace of the Holy Spirit. The body of her boy was arched like a bow pointing upward in the sky, his heart was like an arrow soaring into the midst of God’s own happiness. The arms of God’s love were wrapped around him, cradling her son with a tenderness she had never dreamed of. Then she saw an angel approaching her son to bring the lad back to her. “Wait!” she cried, “Let him be. Now I know it is I who must come to him, not he to me.” The Holy Spirit said to her, “But your heart is still bleeding.” “Let it bleed,” she replied, “it only bleeds for me. He is where I want him to be, his happiness in the Father’s arms is my consolation. I will feel his absence, and I want to miss him. But I do not want to take this happiness from him. Someday I will be with my son embraced with love. I will wait.” That day the woman went outside for the first time since her boy was buried. As she passed along the country road and greeted her neighbors, they said to one another, “Did you see her eyes? They are bright blue, like the morning sky at sunrise, and her voice, it is like music in the air.”

We are all called in Christ Jesus to an ecstasy of happiness, to God’s embrace, to be included in the romance that the three divine Persons have for each other and for us. How can we express our gratitude? In the gospel according to St. Luke, Jesus urges us to be generous with what we have. He tells the parable about a rich man who feasted every day and a poor man, Lazarus, who went hungry at his doorstep. And about the farmer who decided to build bigger barns but died that same night, and about the young man who was too attached to his wealth to follow Jesus, and about the tax collector, Zacchaeus, who gave half his possessions away and was saved. Long ago, another child from the glens of Ireland, St. Bridget, expressed her love that way. Her life is described in a poem by Phyllis McGinley.1 She writes:

Saint Bridget was
A problem child.
Although a lass
Demure and mild.
And though she strove
To please her dad,
Saint Bridget drove
The family mad.
For here’s the fault in Bridget lay:
She would give everything away. 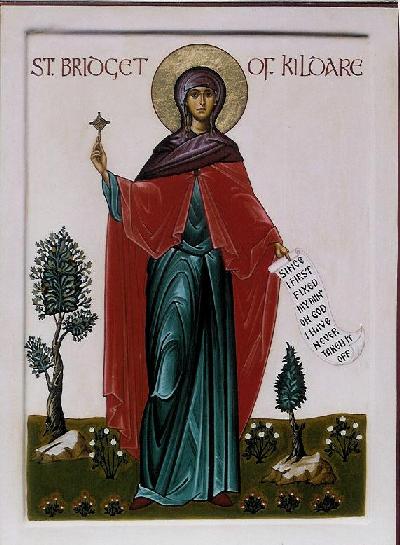 To any soul
Whose luck was out
She’d give her bowl
Of stirabout;
She’d give her shawl,
Divide her purse
With one or all.
And what was worse,
When she ran out of things to give
She’d borrow from a relative.

Her father’s gold,
Her grandsire’s dinner,
She’d hand to cold
and hungry sinner;
Give wine, give meat,
No matter whose;
Take from her feet
The very shoes,
And when her shoes had gone to others,
Fetch forth her sister’s and her mother’s.

She could not quit.
She had to share;
Gave bit by bit
The silverware,
The barnyard geese,
The parlor rug,
Her little niece’s
Christening mug,
Even her bed to those in want,
And then the mattress of her aunt.

An easy touch
For poor and lowly,
She gave so much
And grew so holy
That when she died
Of years and fame,
The countryside
Put on her name.
And still the Isles of Erin fidget
With generous girls named Bride or Bridget.

Well one must love her.
Nonetheless,
In thinking of her
Givingness,
There’s no denial
She must have been
A sort of trial
To her kin.
The moral too seems rather quaint.
Who had the patience of a saint,
From evidence presented here?
Saint Bridget, or her near and dear?

All the mysteries of our Savior’s life have this purpose: to bestow on us his Father’s generosity who embraces us with the love of his Holy Spirit. In gratitude, may we be generous to others, even like St. Bridget, expecting nothing from them in return, because we are married to God and called to dance and play with three divine Persons forever!