Solemnity of the Immaculate Conception of Mary

Solemnity of the Immaculate Conception of Mary

Sharing lunch with a Catholic priest one day, he says to me: “Have you heard the one about Jesus, Mary, and Joseph planning their next family vacation? Jesus says: ‘I’d really like to go to Florida.’ Joseph chimes in and says, ‘I kind of had in mind a Mediterranean cruise.’ Finally, it’s Mary’s turn and she says: ‘I want to go to Garabandal.’ Jesus and Joseph look at her a little funny. Joseph says to Mary: ‘Whad’ya wanna go there for?’ ‘Oh, no particular reason,’ says Mary, ‘it’s just a place I’ve never been.'”

Twelve years ago or so, appearances of Mary were reported in Conyers, Georgia, about ten minutes from the monastery where I lived at the time, attracting thousands of pilgrims every 13th of the month. The huge unruly crowds presented a strange public spectacle for Atlantans inspiring one local radio personality to wonder out loud one day: “Does she do “sports-picks? Can the Virgin Mary tell me who’s going to win the Super Bowl?”

Jokes about the Blessed Virgin Mary are easy for us today, though, one would think, amidst the general merriment, people might pause and reflect a moment how remarkable it is that, two thousand years after her assumption into heaven, anybody is talking about Mary at all. Is Mary a joke? Then she at least enjoys the distinction of being maybe the longest running joke in history. But, supposing that Mary is actually one of history’s great ladies; a woman for the ages, one might ask, why her defenders are not more effective in getting people to take her seriously? One might also ask: “With all the reports of Mary talking to visionaries, why doesn’t her voice figure more prominently in history and in our day?” People speak insensitively and even derisively about Mary. Why doesn’t the great lady talk back? To look at people’s behavior, one might conclude a consensus had been reached: Mary doesn’t talk. Mary hasn’t said anything in ages and so nobody worries much about the possibility of Mary speaking up any time soon. Say whatever you like, you’re going to get no argument from the Virgin Mary. 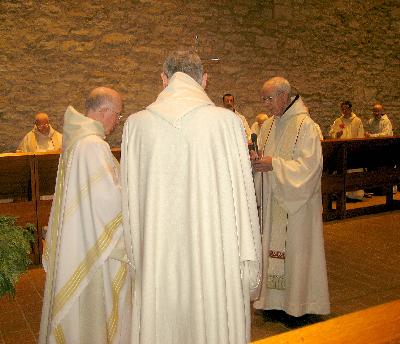 The silence of Mary is, in fact, deafening in our day. Digressing for the moment from the question of what this silence reveals about Mary, we twenty first century Americans could ask ourselves what Mary’s silence might reveal about us; about the kind of people we have become, and about the culture we have created around ourselves.

After communion, at this morning’s mass, our Fr. Stephen will renew his Solemn Monastic Vows on this occasion of his anniversay of fifty years as a professed monk in the monastery. It will be a simple and quiet celebration of a life lived simply and quietly. If Fr. Stephen’s renewal of vows happens to be picked up and reported on CNN or CBS national news tonight, America’s reaction will likely be as enthusiastic as its reaction to the news of the Blessed Virgin Mary’s Immaculate conception. The one mystery is enveloped in the other, and busy Americans on their way to work this morning are not inclined to take much notice of either.

Imagine for a moment that Mary, Mary herself, did actually pay a visit to America, and that she wanted to talk to us. Now, Americans today are not people inclined to “sit at the feet” of Mary or anyone else. That’s not how conversations are conducted in America today. We are all equals; nobody is superior to anybody else or deserving of special treatment. When we talk to each other, we sit in a circle. We meet each other eye to eye and speak our piece as partners in dialogue. And so, Mary, having arrived, would certainly be invited to speak, but as simply one more contributer to our “town hall meeting“. Imagine, for a moment, Mary, the Immaculate Conception trying to do that. Imagine Mary taking her turn to speak at a town hall meeting. Mary, is not there long when someone recognizes her and cries: “Hail Blessed Virgin Mary, how great you are! For centuries women had no voice, but in you women have at last found a voice!” “Well, thank you,” Mary says, “but actually, my voice hardly occurs in scripture, I only had a couple of lines. And, as you know, nobody’s heard from me for years.” “Maybe so”, says another in the circle, “but you raised yourself from poverty and obscurity to become a woman for the ages; the one and only woman distinguished with the title: The Immaculate Conception”! “That’s true“, says Mary after a moment’s reflection, “but as best as I can recall, I never actually succeeded in raising myself to any notable accomplishment at all. I am the Immaculate Conception, but I don’t recall anyone addressing me by that name on the streets of Nazareth. 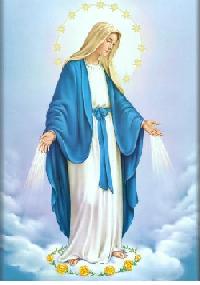 It was not I who introduced the possibility of my immaculate conception. No one ever heard me speak of such a thing – this truth was revealed by the Holy Spirit in the hearts of my Son’s faithful followers, over the course of many centuries, and was confirmed by a judgment of the church under the guidance of her shepherds.” “Exactly.” says another in the circle, “You Mary, have been a victim of neglect and injustice and your appearance here today as one preserved from original sin is an indictment to the world that ignored you; a world corrupted and disfigured by sin and which every able-bodied man and woman must work with all their might to change.” “Certainly we all have to work to change the world for the better“, says Mary, the Immaculate Conception, “but keep in mind, I am a living sign of a grace that has already been restored; a gift of love given to all of you which anticipates any and all efforts you or I might make to improve the world; efforts which may succeed or may entirely fail and produce no visible results. My immaculate conception is a sign; a sign that forgiveness, eternal salvation, and life itself are all pure gift, all the pure unmerited gifts of God whose love can’t be held back or restrained but which pours out into creation and into history and draws all history toward the fulfillment of a glorious destiny! Do you understand? In my immaculate conception Grace is already restored to you; your salvation is not achieved, it is given; it is yours.”

Imagine Mary trying to make THIS voice heard at a town hall meeting in America and you may get a new insight into the deafening silence of Mary in our day. You may find yourself coming up hard against the paradox that in the case of this woman called the the “Immaculate Conception,” each time she opens her mouth to speak it becomes harder for Americans to hear her.