A few weeks ago when Sr. Martha sent over the readings for today she made a slight mistake, at least I think she did. The Gospel she chose was Lk.6:37. I said to myself, either she made a mistake or she wants me to read on to the end of Luke which would certainly bring home to the community how important Scripture is in our life. It would have been a powerful message but one not well received by the indolent. But I know Martha does not like long liturgies so I said it was a mistake. However when I went to Lk.6:37 I wondered because those few words sum up a whole life of effort. Is it possible to sum up a life say, 25 years of vowed life, in a few words?

A few weeks ago I heard about a series of books with titles like this: “Six Word Memoirs of Love and Heartbreak” and Six Word Memoirs of Famous People”. Some examples of Heartbreak were, “Coffee my vice, so was he” and “Should have read the pre-nup agreement.” For famous people: “My life made my therapist laugh” and “Nearly 60 still on rough draft.” I thought of one for the forthcoming abbot of New Melleray, “Here I am, deal with it”. 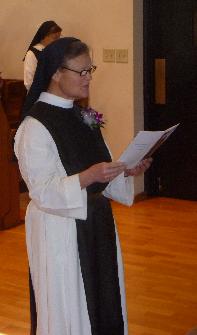 Now Sr. Martha had about 1400 pages of the Bible to choose a few verses that either sum up her life or express the ideals she strives for. I think she did a great job in choosing meaningful verses but most especially in the Gospel. She did add verse 38 to close out Luke, but before I knew that, I found a six word passage that says it all: “Forgive and you shall be forgiven.” These words could be worn as a badge telling people who you are. It includes the present, the future and the past is implied. How many times do you think Sr. Martha or any of us had to forgive and be forgiven over the past 25 years? Hundreds if not thousands of times; Jesus told us not to put limits on it; forgiveness is a limitless quality of the heart like love, in fact it is a part of love. Paul says, “There is no limit to love's forbearance” (1 Cor. 13:7).

It is hard to think of a virtue more fitting for community living. Maybe we do not actually have to express it each day but there is something called the spirit of forgiveness, it is an attitude, a way of looking at life, a stance we take vis a vis the people we live with. The words, forgive and you shall be forgiven are like a mirror that reveal to us the need for continual conversion. It is a mirror of humility reflecting back to us a path to walk, a way to live our vow of conversion of life. A mirror usually only reflect what is standing before it but the mirror Scripture reveals what should be standing before it. Rather than discouraging us the mirror of Scripture, exposing what we are and what we should be, can be a great blessing. Humility cannot be won or achieved by will power, it is a gift, something that happens to us and usually comes with failures. 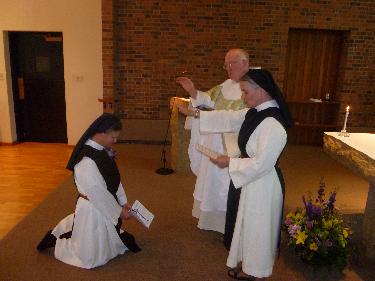 The waters of Shiloh flow in silence, ever so gentle in its movement, just so does forgiveness flow through us. Every time we forgive we become a sacrament of the Holy Spirit, we make visible the invisible, and we incarnate the very Spirit of God in our community and in the world. No speech, no word no voice may be heard beyond these walls but the span of forgiveness extends through all the earth, to the utmost bounds of the world.

So congratulations Sr. Martha on 25 years of monastic living and to the community that nourished your life. It can all be summed up in six words: “Forgive and you shall be forgiven.”