The Feast of Saint Lawrence

Among saints, the young deacon, St. Lawrence, is a powerful commentary on the Bible’s teachings about the vanity of honors, riches, and pleasures; or the lust of the flesh, the lust of the eyes, and the pride of life, those common afflictions of body, soul, and spirit that make us so self-centered.

The world values honors, the jobs we have; God values why we do them. Lawrence had a second rate position, serving others and taking care of the Church’s finances, helping presbyters, bishops, and the pope. But almost eighteen centuries after his fiery ordeal we still remember that love for Christ motivated all he did. Christ was his center.

The world values riches; God values people. Lawrence was commanded to gather the treasures of the Church within three days. When the Roman prefect came to seize the treasures, Lawrence opened the Church door and there stood the sick and lepers, the aged and blind, the lame and deaf, the widows, virgins, and young orphans. Lawrence said, “Here are the gold coins and shining jewels I promised you.” Lawrence valued people, the real treasures of the Church, children of light soon to reign with Christ in glory.

The world values pleasures; God values the cheerful giver who lives and dies for Christ. The enraged Roman prefect sentenced Lawrence to die by inches over a slow fire. As Lawrence was being cooked on an iron grill, he made sport of his own sufferings, saying, “Turn me over, for I am finished on this side.” And when the other side was roasted he said, “Eat now, for I am well done.” 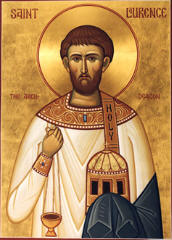 When I reflect on the passion account of the youthful Lawrence, how he was first stripped naked and beaten with leaden whips, how plates of red hot metal were pressed against his bleeding body, how he was tied to a rack and stretched so that his limbs were wrenched apart, how his flesh was then torn with sharp hooks, and finally how he was placed on an iron grill to be slowly roasted to death, I recoil in horror and great fear, unable to imagine enduring such pain without giving in to blasphemy. But grace is not given to our imaginations about future ordeals, it is given to our wills in the actual hour of our need. Christ promises us, “Do not be anxious how you are to speak or what you are to say, for what you are to say will be given you in that hour. It is not you who speak, but the Holy Spirit of your Father speaking through you” (Mt. 10:19-20)

Probably none of us will be put to death by persecution. But faith often comes under attack in other ways. Michele McBride, a survivor of the 1958 fire at Our Lady of the Angels grade school in Chicago, told the story of her ordeal. She was only thirteen years old when fire trapped her in a second story classroom. Michele survived because at the last possible moment, after she saw a classmate explode in flames, and herself burning alive, she dove out a window and fell over twenty feet, suffering a severe skull fracture when she hit the concrete below. Her whole body was badly burned, but not as badly as her soul and spirit. Her physical and spiritual recovery was far more painful than the fire itself. In her book, The Fire That Will Not Die, Michele writes, “Why was I forced to endure such agonies. Was this a punishment from God? What did I do to deserve such horrible pain? … A reporter asked me how I felt and I replied, ‘Well done.’ I was tired of being polite. … Great waves of depression washed over me” (p. 84f). As the years past she said, “I believe in God. I fight with him all the time. I threatened to expose him to the world. I questioned if God really knows how difficult life can be. I had to learn that life’s problems come not as punishment, but as a part of life to be faced” (p. 183). Eventually she succeeded in overcoming this attack on her faith. She writes, “I have often thanked God for special things in life, such as making water and coffee calorie free. … But why is there so much work to be done on earth? Life is full of problems and injustices and hardships, but what counts is the personal viewpoint. I had to change many of my interpretations of life. This was hard for me” (p. 183). Gradually she realized that she was not evil, that God loved her. She writes, “I can now say I am a good person, I am not afraid to have good feelings about myself” (p. 189f). She suffered from the disfiguring and debilitating effects of the fire all her life, dying seven weeks ago at the age of 56. With a sobering sense of humor equal to that of St. Lawrence she could write, I have joined the ranks of God’s toasted ones!

We are all called to have the heart of martyrs. For it is the cause, not the painful event that constitutes a martyr. The cause is Christ, and the heart of a martyr is centered on love of Christ, not on honors, riches, or pleasures. We have read the Sacred Scriptures at this liturgy, and studied the commentaries, now it remains for each of us to become a commentary on the Bible.