The Feast of Saints Simon and Jude, Apostles

Most of you will remember that on the evening of September 11, 2002, that sad anniversary of the terrorist attack on the World Trade Center, on the very site where the great towers once stood the world was treated to an eerie spectacle: two towers of light created by powerful incandescent lamps pointed straight up into the night sky, creating for a little while the ghostly image of the twin towers raised again — an edifice of pure light. Everyone witnessing the event, acknowledged its immediate impact; its poignance; its power to evoke memory and deep feelings. It was not the moment to raise philosophical questions. But a year later, I ask myself: I wonder what America saw when it looked at those two towers of light? What did people understand was being shown to them by this striking image? I suspect that, in spite of the unity of feeling created by the image, you would get widely differing and contradictory answers to the question: What did the image mean? Were those towers of light a gesture of defiance against our enemies? Was the light show a profession of our belief in the resurrection that awaits the victims of the attack? Were we simply celebrating our famous American optimism in the face of adversity? Or were those towers of light actually a lament? Was it simply the American people fixing our attention on the black empty air and crying out as a nation: “Oh lost! Oh lost!” 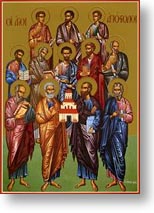 Today, as we celebrate the feast of Simon and Jude, it occurs to me that as Christians we have available to us an interpretation of those twin towers of light which is singularly meaningful and beautiful. We have just heard narrated in today’s gospel the calling of Simon and Jude along with ten other disciples; a critical moment in the emergence of Christ’s church which will be the sacrament of God to the whole world. And it is to be particularly noted that this church is not built of bricks – it is built of souls; our living human souls. The church of Christ is a “spiritual edifice” described by Paul in the first reading who says: “You”, (Simon and Jude, the twelve, and us), all of you form a building, which rises on the foundation of the apostles and prophets, with Christ Jesus himself as the capstone. Through him the whole structure is fitted together and takes shape as a holy temple in the Lord. In Christ, you are all together becoming one dwelling place for God in the Spirit“. The towers of light, in other words, might be seen as representing that “spiritual edifice” by which the whole of humanity is “fitted together” to become a holy temple; one dwelling place for God in the Spirit with Christ as the capstone.

“A lovely interpretation”, you say, but not one that would play well to our Jewish and Muslim brothers and sisters, and therefore not much more likely to unify Americans than the other interpretations I mentioned. But I will say in response, that you misunderstand, and I will even call on Simon and Jude to back me up. The edifice Paul speaks of and which I am referring to, is not something put together like a crusade or a creedal formula. It is a spiritual edifice – which is to say, its stones are constituted by souls whom Christ, in his unsearchable will, has called; has personally called to be his own. It is Christ’s call, not any human effort or devising that builds the edifice I see represented in the towers of light; the whole structure of humanity fitted together, and made one dwelling place by the call of Jesus Christ. But if my saying that Christ is the capstone of this structure, raises objections . . . then I will accommodate them. I will hold my tongue. But I will also hold to my personal belief that the raising of this edifice is as sure as faith itself, because I believe Christ Himself is calling this edifice into being. And I will persist in my belief that Christ, who I profess to be sovereign Lord of all human destinies, can call whomever he wishes, whenever he wishes, and as many as he wishes.