The Feast of St. John the Apostle

No sooner do we celebrate the solemnity of the Prince of Peace and the Church calendar opens the door for the assailants to charge in. They line up with glee to slaughter hapless victims in a rampage of fury. Yesterday St. Stephen gets the nod and the stonewall community has a field day. Tomorrow the feast of the Holy Innocents and a military force pounces with no opposition. Ordinarily, an apostle has a dash of red on his uniform. But today white vestments are worn as St. John is not regarded as a martyr. How did it get on the calendar at this time? To be a martyr for the faith is to be a witness. Did he try to elude it? Hardly. He stood at the foot of the cross along with Mary and could easily have been apprehended and slain in due course. He gave witness to his belief also by preaching and by writing the fourth Gospel and three epistles. 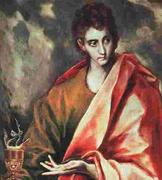 In the Gospel today he shines forth as a track man sprinting to the place where Jesus had been laid in a tomb. Our Lord said in the Gospel about the last days, “Where the body is, there also will the eagles be gathered” (at least that’s one translation). John was an eagle. He wanted to be where Jesus was. Whether Jesus is alive or dead, John comes running to pay his homage and to be in his presence. Let us go to Jerusalem to die with Jesus as so many have done before us. To be present at the Sacrifice of the Mass and to adore and receive the Body of Christ is to be an eagle in pursuit of its prey.

The Feast of St. John the Apostle

The last words a person speaks before dying sometimes express deep faith and love. When St. Stephen was being stoned to death he prayed, “Lord, do not hold this sin against them.” At her last breath St. Therese of Lisieux said, “My God, I love you.” St. Bernadette of Lourdes died as she whispered, “Holy Mary, pray for me a poor sinner, a poor sinner.” The Mexican Jesuit, Padre Pro, facing a firing squad, extended his arms in the form of a cross and proclaimed, “Viva Christo Rey!” Long live Christ the King. And then five bullets pierced his chest. Not everyone is as edifying. An elderly man on his death bed was told that angels were waiting to receive him. He gruffly replied, “Waiting are they? Well, darn it, let them wait.” Sometimes death is unexpected, and a person’s last words hint at what happens next, like those of an amateur electrician “I think the power’s off,” or a hiker in the woods “Don’t worry, it’s probably hibernating,” or a mailman’s last words “Nice doggie,” or finally those of a tourist in the jungles of Africa “So, you’re a cannibal.”

We don’t know the last words of John the Apostle, but St. Jerome writes that in John’s old age he kept saying, “Little children, love one another.” When his disciples asked why he repeated it so often, he replied, “Do this and it is enough, for it is the Lord’s command.”

St. John was not always so intent on loving others. As a young disciple, hardly more than twenty years old, he and his brother James were called “sons of thunder,” perhaps like their father, Zebedee. He couldn’t have been very pleased the day his boys left him with unmended fishing nets. When a village of Samaritans refused to receive Jesus they triggered the anger of James and John who wanted to call down fire and consume them. And when the two brothers caught a stranger casting out devils in Jesus’ name they jealously forbade him to ever do it again. To their violent tempers they added the ambition of their mother: “Grant us to sit one at your right and one at your left in your kingdom.” And they were proud, arguing about who was the greatest. Pride, ambition, jealousy, and anger prepared John for a tremendous fall on that dark night when he and the other apostles deserted the Lord and fled in fear. What did the mother of James and John say when she found her cowardly sons? Perhaps they were “sons of thunder” not so much like their father but like Mrs. Zebedee! 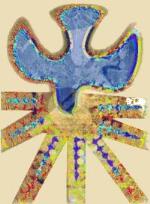 Robert Browning captures John’s shame in his poem, A Death in the Desert: John speaks, “Look at me who was present from the first! You know the things I saw … Christ transfigured … who had trod the sea and brought the dead to life. … Then came a test, ‘Forsake the Christ…’ You ask, ‘What should wring this from thee?’ What wrung it? A torchlight and a noise, the sudden Roman faces, violent hands, and fear of what the Jews might do! Just that, and it is written, ‘I forsook, and I fled.’ There was my trial and it ended thus.” His zealous anger, together with his pride and ambition for grand accomplishments, crumbled as he ran headlong from the garden, away from the Lord. John was not the young man with nothing but a linen cloth about his body, who ran away naked when the Roman soldiers tried to seize him. But John’s soul was just as naked, stripped of all pretenses, of all boasting and illusions of grandeur. His love was tested and he failed.

Robert Browning continues his poem, “Life, with all it yields of joy and woe, of hope and fear, … is just our chance o’ the prize of learning love. … [This is] love’s way: to rise, it stoops.” The great watershed in John’s life, and in ours, is the cross. Love, crucified, bowed down as low as it could go, into total humiliation. Yet Love kept on loving. John witnessed the suffering of Jesus and heard his last words, “It is finished.” Christ’s love was tested and he did not fail. This is “love’s way: to rise, it stoops.”

John’s whole life changed. There was no more boasting, no more arguments over who was the greatest. From then on John stooped to let Peter take precedence. In the whole book of Acts, John is always coupled with Peter, but never says a word. In John’s gospel, he does not let his name be mentioned, nor the name of his brother James. He is simply called the witness, or the disciple whom Jesus loved. During the next seventy years of John’s life he did not become a pope like Peter or a glorious martyr like other apostles. Instead he became a lonely prisoner in exile on the island of Patmos. He had discovered “love’s way: to rise, it stoops.” And so, when John writes, “Little children, love one another,” he is telling us to stoop down, give way, accept the lowest place, suffer patiently, do what benefits others, put others first. Then love will rise in our hearts like a burning fire to set aflame all we meet. And when we die, whether our last words are the names “Jesus, Mary and Joseph” or something like “So, you’re a cannibal,” the first words we will hear after death will be from Jesus saying, “It is finished! Well done good and faithful servant. Enter into my joy.” He will call us by our new names, and lifting us up from the depths of death to eternal life he will say, “You are precious in my eyes, and honored, and I love you,” (Is. 43:4).