The Feast of the Ascension and Mother’s Day

During World War II, Hannah, a young Jewish mother, and her husband, Solomon, together with their sons, Jacob and David, were taken to a Nazi concentration camp. Anyone who could not work was gassed and burnt in the ovens. Their youngest son, David, wore a brace to support a deformed leg. When they arrived at the camp Solomon was immediately sent to hard labor. That evening he searched for his family. Finding his oldest son, Jacob, Solomon asked him where little David and the boys’ mother had gone. Jacob, in tears, replied, “The soldiers came and took him to the ovens and Mother went with him so that he would not be alone.”

At the Last Supper, Jesus, knowing his hour had come, told his disciples, “I am not alone, for the Father is with me” (Jn 16:32). When soldiers came to take him to Golgatha and when Jesus died on the cross he was not alone, the Father was with him. The last words of Jesus were a cry of love, “Father, into your hands I commend my spirit.” His Father was with him, already holding Jesus in his arms.

At his ascension Jesus promised that we also would never be left alone, “I am with you always, to the end of the age.” The silent, invisible God whom holy Job wanted to see with his own eyes, and hear with his own ears, answered Job’s prayer. He took on our flesh in Mary’s womb and became Emmanuel, which means “God is with us.” The blind saw him, the deaf heard him. The distant landlord who seemed to have abandoned his vineyard, Israel, sent his Son to be with us saying, “They will respect my Son.” The missing God who was ridiculed by taunters in the psalms asking, “Where is your God,” was lifted up on a cross for all to see. Jesus went with us through the gates of death so that we would not have to go there alone.

The ascension of Jesus was not the end of his presence with us, but a new way of being intimately present. St. Augustine writes, “You ascended before our eyes, and we turned back grieving, only to find you in our hearts.”

Once a young boy was about to have open-heart surgery. To prepare him the surgeon said, “Tomorrow I will look at your heart.” Smiling, the boy interrupted, “You’ll find Jesus there.” Ignoring his remark, the surgeon continued, “After I have seen your heart I will try to repair the damage.” Again, the lad insisted, “You are going to find Jesus in my heart.” The surgeon who had suffered losses in his own family, and was still in pain from a broken marriage, felt very distant from God. He replied in a chilling tone, “No, what I’ll find is damaged tissue, constricted arteries, and weakened muscle.”

The next day he cut open the boy’s chest and exposed his heart. It was worse than he expected: a ravaged aorta, torn tissue, swollen muscles and arteries. There was no hope of a cure, not even the possibility of a transplant. His icy anger at God began to surface as he thought, “Where is God? Why did he do this? Why is he letting this boy suffer, and cursing him to an early death?” 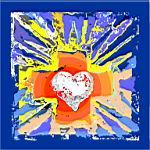 As he gazed on the boy’s heart he suddenly thought of the pierced, torn, bleeding heart of Jesus, and it seemed to him that the boy and Jesus shared one heart, a heart that was suffering from a fallen world, a heart that was redeeming the world by love. Struck with awe at such goodness, such redemptive suffering, tears began rolling down the surgeon’s cheeks, hot tears of compassion for the boy and for Jesus. Later, when the child awoke, he whispered, “Did you see my heart?” “Yes,” said the surgeon. “What did you find?” the boy asked. The surgeon replied, “I found Jesus there.”

The four gospels do not end with Jesus’ absence, but with his continuing presence. Matthew does not mention the ascension. His gospel ends with Jesus saying, “I am with you always, to the end of the age.” Mark writes that Jesus was taken up into heaven, and then he adds, “the disciples went forth and preached everywhere, while the Lord worked with them and confirmed the word with signs.” Luke ends with Jesus ascending into heaven in order to send the promise of the Father upon us, his own Spirit. The last scene in the John’s gospel is of Jesus saying to Peter and to us, “Follow me.” Christ became more present in the world after his ascension than after his birth in Bethlehem. He continued his presence with us in the Eucharist, in the Scriptures and in our hearts.

As Gerard Manley Hopkins expresses it, “…Christ plays in ten thousand places, Lovely in eyes, and lovely in limbs …, [Loving] the Father through the features of [our] faces.” Like Hannah, the wonderful Jewish mother who chose to die with her son, David, so he would not be alone, Jesus lives and dies with us so that we will never be alone. “I am with you always,” he said, to the end of the age, to the day and hour of a new beginning when we will ascend to the Father and be intimately present with Jesus, with his Spirit and with each other forever.