The Feast of the Holy Family

Feast of the Holy Family

To belong to a family is to be a member of a unit where the individuals know each other like no one else does and even they don’t. In the Gospel, mention was made of two who were no longer just husband and wife but with a sole addition this couple became known to the community as father and mother. They began to share their life with the new arrival. Once this fact occurs, that baby makes three, happiness is supposed to reign, more or less, in dad’s blue heaven. And yet a golden sunset citizen stiffens this happy mother with a report that sounds devastating. “This child is destined for the fall and for the rising of many in Israel, “destined to be a sign that is rejected. (A sword will pierce your own soul.)” Disturbed sleep at night is one thing. Now looms the specter of besieged days. What child is this? His parents took care of him at a time when humanly speaking he could not take care of himself. How helpless can a Redeemer be? 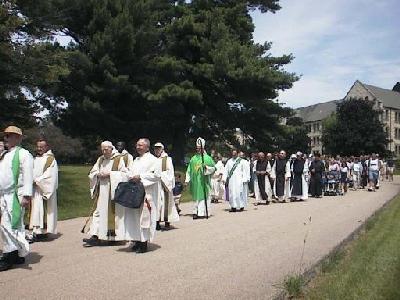 A return to Nazareth would reveal the home of a breadwinner, a housekeeper and a scholar in a class by himself. After some years an incident happens that is recorded in the Gospel. Whatever kind of games that were played around Nazareth, boy wonder-counselor was going for all the marbles, he was to tip his hand that he was the prime contender for the messianic title. At the age of twelve his parents came upon him “in the temple sitting among the doctors of the law, listening to them and asking them questions. All those who heard him were astounded at his intelligence and replies.” Theologians tell us that to start a false religion is a particularly heinous crime. For he was to make a run at the Jewish religion that not even its own leaders thought possible. “Did you not know I must be about my father’s business?” Listen to the boy and hear the man.

The practical world of planes, saws and wood shavings would really never be his proper element. By taking a calculated risk at being misunderstood, he would allow himself to be rejected by many. “I have done many good works for you to see, works from my Father. For which of these are you stoning me?” The Jews answered him, “We are not stoning you for doing a good work but for blasphemy. You are only a man and you claim to be God!”

A certain feast was at hand. “His brethren said to him, ‘Leave here and go into Judea that your disciples also may see the works that you do. No one does a thing in secret if he wants to be known publicly. If you do these things, manifest yourself to the world.’ For not even his own brethren believed in him.” Finally, when he sent a delegation to John, who was incarcerated, his final statement was, “And blessed is he who is not scandalized in me.”

By accepting him as a member of the family this remarkable couple came under the influence of his radiant presence. The subtle but real impact he had in their lives is evident from the fact of today’s feast. He made them a holy family beyond comparison. At this celebration, by accepting him into our own lives, let us ask him to do for our own families the very same thing that he did for his elated parents.

The Feast of the Holy Family

The world is full of laws. Some are obvious, such as the law of gravity. Other laws take more human ingenuity to discover, such as Murphy’s Law (if something CAN go wrong, it WILL go wrong) and the Peter Principle (persons are promoted to their level of incompetence). Another such law is that the capacity to idealize is in direct proportion to the distance between the ideal and the one esteeming that ideal. The further away we are from a person or group, the easier it is to focus solely on the most attractive aspects and be oblivious to any defects. The closer we come, the more apparent the defects, limitations, and lacks become. We seem to like to idealize other persons or communities because they are then more attractive and motivate our own energy. “I want to be like Mike.” When we become disillusioned, we can then withdraw our allegiance and loyalty because they weren’t really good enough for us.

Our community recently heard from Fr. Don Goergen, O.P., that disappointment and disillusion can be salutary experiences. They tell us that we hadn’t got things right, that we weren’t really in touch with reality as it is. Disillusionment clears the way for us to direct our energy toward reality and to be in touch with God as he is in the world as it is. Underlying our idealism is an energy which wants to be connected, to be in relationship, and to give ourselves to something greater than ourselves.

This energy has just been misdirected and misplaced in focusing on objects which are more the creations of our projections and fantasies than real goals worthy of our striving. This energy is first awakened in us in our own family, where we are received by a community that offers us undeserved love. The first and deepest self-awareness we have emerges in the communion which is already there and offered us as a gift. Even when our experience is marked by dysfunctional parenting, by abuse, or by abandonment, these traumatic distortions in their own way reveal that it is our inherent need to be accepted by unconditional love. Our interiority develops in working from within the context of a dialogue that has already taken place. Many of the icon scenes of the Nativity depict Joseph off in a corner, pondering all that has happened. Luke tells us several times that Mary pondered in her heart what had been said or what had happened. They were assimilating or processing the words that had been spoken to them. 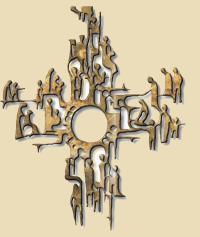 The infancy narratives show Mary and Joseph both in a continuing effort to disrobe themselves of all illusions and even of their valid and legitimate expectations. They accepted the surprising and disruptive character of God’s word into their lives. At a profound level, this word fulfilled the prophecies which formed Israel’s expectations, but in ways that could not have been predicted. As all parents must, they provided a protective and nurturing space in which the Word who was their son could grow. But at the same time, they respected the unique difference of this son whose life was to transcend that ancient barrier between God and humanity.

The holy family was composed of persons who acted out of the distinctness and who respected the uniqueness of the other. Each had received a divine message and vocation separately, and then had to communicate this transforming experience to the other. Nothing but the most sensitive and trustful level of understanding between them could allow each to share the mysterious communication that had been made in the innermost part of their being. Today’s Gospel recounts Joseph’s being open to God’s directions in his dreams, that level of his psyche which stands at the threshhold of communication between consciousness and the unconscious, between the sensible and the invisible. They left “at night.” Night is the time of God’s action: the night of Passover; the night when God’s Word leaped down from heaven’s throne to earth. It is the night of human “unknowing” and the darkness of faith, where (as John of the Cross tells us) we are led by God to places that we could not go by our own vision or feet.

The holiness of this family did not eliminate its need to be aware of the danger posed to it by the powers of this world. The world has shown itself inhospitable to God’s word. There are “those who seek to destroy the child.” Joseph is warned. He experiences fear. Those who are not blinded by illusions can see through the illusions and masks of this world. To be attuned to the word is to know that it is in jeopardy. Nor are we ourselves always hospitable to God’s word. Our concerns and empire-building can force it into exile. We lack the wisdom to accept and be formed by this word. Wisdom calls us to closeness and immediacy, the immediacy of hearing and fulfilling the word in action. The first reading from Sirach calls us into closeness, into the immediacy of being tender and kind towards those whose old age can no longer command us by their attractiveness or strength. Let yourself be moved by deep bonds of belonging and connectedness which see into the heart of reality and the heart of another person. Act out of that divine source of energy, that kindness, humility and patience which have been implanted in us by the word of God. Paul in Colossians is not prescribing an impossible external law, but evoking that new life which is already in us. The people we are called to love may be difficult. But we, too, are difficult even as we remain lovable. We have been called into that boundless mystery of God’s love which gathers us into Christ’s body as the family of God.