There are a number of movements current in society that champion respect for the dignity of the human person. Some come from a religious perspective, some from a secular perspective. In the Judeo-Christian tradition the worth of every person comes from God’s love, not from any achievement or status a person may claim. Each person has been created in the image and likeness of God and because of this stamp of likeness to God, each person is worthy of respect. Even though sin has distorted the image of God our likeness to God remains, and this likeness is the basis of human dignity.

Since we are all subject to sin, every person deserves not only our respect but also our compassion. We may have our lists of sins arranged in order from bad to worse, but none of us can presume to put our self in God’s place. Only God searches the heart and only God can judge the heart. Jesus could act as God acts; and Jesus’ way was the way of compassion and forgiveness not the way of condemnation. Jesus came to heal the alienation from God that sin caused and to restore the image of God that sin damaged. He not only told us how to act in a manner worthy of the dignity we have from God; he showed us how to act.

When I reflect on this morning’s gospel against this background, the sin of the scribes and Pharisees goes deeper than it might first appear. There is no evidence from the gospel that they were the least bit concerned about sexual morality or the sanctity of marriage. 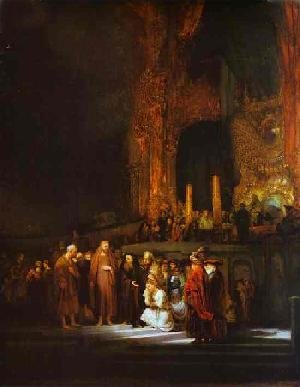 They wanted to back Jesus into a corner and the woman was a convenient tool to achieve their purpose.In using the woman as a means to an end rather than respecting her as a daughter of God and their sister the scribes and Pharisees sinned against the law that they claimed to uphold. In rejecting Jesus’ way of compassion and forgiveness they rejected the God whom they claimed to know and serve.

I think there is a salutary warning in this morning’s gospel for all of us. I don’t think any of us would be so knowingly cruel so as to behave as the scribes and Pharisees; yet evil can be subtle and it has been pointed out that in contemporary society the devil is probably more effective as an angel of light than as a roaring lion. Self-righteousness can get the better of any of us, and there is no lack of situations to offend our moral sensitivity. Jesus did not acquiesce to what is wrong and we are not called to acquiesce to what is wrong. The danger is that in trying to defend the gospel we can act contrary to the gospel ourselves. Jesus’ challenge to the scribes and Pharisees about who should throw the first stone is still valid today, whether that stone is material or verbal. Jesus’ example that the way of compassion is more effective than condemnation is still valid today.

Certainly St. Paul cannot be accused of having been lukewarm in zeal for God’s will. Still he considered everything he did that was not the way of Christ as rubbish. Let us follow St. Paul’s example and be zealous in following Jesus’ way of compassion and forgiveness.

Who would not shudder at the thought of being six years of age and facing the challenge of the academic world? It might have been Euclid who was asked by someone, “Is there an easier way to learn geometry?” His reply, “There is no royal road to geometry.” For some it might turn out to be a mission. Anyone who is sent on a mission receives a well defined target and a definite goal to achieve. It implies someone who is driven, has impetus and forward thrust. It is understood that the means will readily be at hand when needed. Lacking these it could hardly be foreseen that what was intended would be within reach. Sheer determination to carry out the mandate becomes imperative. 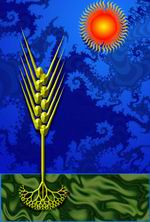 In the Gospel today, Jesus does not mince words about someone who would claim to be one of his followers. His words are manifest, precise and uncompromising. They mystery of life has been placed on the table. Ignore it at your own peril: “Whoever loves his life will lose it.” At one time he was going through Samaria and no one dared hinder him for he was headed for Jerusalem on a mission. Another episode tells us: “I have a baptism with which I must be baptized and how I am straightened until it is accomplished.” Baptism is an immersion. The baptism he implies is one of suffering and distress. It is a notification to Jews and non-Jews that if they are serious about becoming a follower of Jesus, they come to realize that the royal road of the cross is the only sure path. No one has a monopoly on evasive tactics trying to elude it.

In the liturgical cycle we are approaching the dramatic events of Holy Week. Pressure builds up until the final resolution for his adversaries reaches its climax on Good Friday. They think that once he is dead, the movement he tried to start will simply fade away. But human reckoning has its own limits. He has the last word.

At the Easter Vigil we make our profession of faith when we renounce Satan and all his works. Let geometers measure the earth. May it be said of us what our Lord said to those who came back from a mission: “Rejoice not in this, that demons are subject to you. But rejoice in this, that your names are written in heaven.”

“Lazarus, come forth!” It was a terrifying moment. Scarcely a person breathed. Necks were strained so that eyes could see the open tomb. Men and women stood paralyzed, as if time had stopped. Suddenly, a shrouded figure appeared in the gaping mouth of the cave. From the land of the living a great gasp rose into the air. The dead one stood motionless while the living staggered in shock. Is it a ghost? Can a dead man stand up? What is under that shroud? They saw the wrappings of death and were afraid. Jesus saw the life hidden within and rejoiced. So he said, “Unbind him, and let him go.” Surprisingly, the joy that must have greeted the return of Lazarus is passed over in silence. Instead, St. John writes that when the chief priests and Pharisees heard what Jesus had done they convened the Sanhedrin and from that day on they planned to kill him. The gift of life to Lazarus was met with a sentence of death for Jesus, because the leaders wanted life to be on their own terms, not those of Jesus.

“Lazarus, come forth!” It was a very loud cry. Never before had Jesus raised his voice against the ancient enemy of death with such open defiance. There, in front of everyone, he gave life to a body already returning to dust to show that the desire of his Father is always to give life, not to take it away. To reveal his desire and to glorify his Father, Jesus made this miracle of life a sacred action, a liturgy of resurrection. He began with a public prayer of thanksgiving to the Father. Next, he prepared for the solemn moment by having the assembled people roll away the heavy stone. Finally, he proclaimed in a loud voice for all to hear those words that commanded resurrection, words with the power to cause what they say, “Lazarus, come forth!” This is the voice all the moaning, mournful hearts of humanity long desired to hear, the voice that unties the knot of death binding bodies to burial grounds. At the sound of this voice death lost its claim to finality. Only life endures forever, death always comes to an end. But when a sinful world wants life to serve its own desires, it rejects the life that God gives. So, the loud cry of Jesus against death and for life was met by another loud cry when the crowds shouted, “Crucify him! Crucify him!”

“Lazarus, come forth!” It was the call of a Shepherd to one of his own. “I am the Good Shepherd, I know mine and mine know me. … My sheep hear my voice, and they follow me,” (Jn 10:14 & 27). “The hour is coming when all who are in tombs will hear [my] voice and will come forth…” (Jn 5:28-29). This was not yet the hour for the general resurrection on the last day. But the Good Shepherd can give life whenever he wills, to whomever he wills because he is life. He gave us our human life at conception. He gave us his divine life at baptism. And he will give our dusty dry bones new flesh like that of a child when he calls us by name to come forth. When Jesus promised Martha, “Your brother will rise,” he also promises us, “Your dear father, mother and sister will rise. Your loving spouse, companion of your youth, will rise. Your beautiful child whose tragic death was a sharp sword through your own heart will rise and be given back to you.” Jesus was deeply troubled, even angry at the scourge of death and sin. We suffer when a loved one dies, someone close to us. But the Good Shepherd, who loves all he has created, bleeds for every death. He weeps for everyone descended from Adam and Eve, the first who wanted life on their own terms and harvested death.

A young, newly ordained priest was called to a hospital emergency room. Four teenagers from his parish were in a car accident. An officer took the new priest aside and said no one survived. Would he please tell the parents? The priest was stunned, his face turned pale, his heart started racing. Passing through the double doors he saw the anxious faces of parents who turned to him for answers. His voice breaking, all he could say were two words, “They’re dead.” Parents collapsed into chairs and onto the floor crying and shrieking. Father doubled over in pain and began sobbing with them. He couldn’t say anything, he just touched them and wept. The next day when he went to the wake, people looked at him, some pointed. He felt like such a failure. After the service, as he was leaving, several of the parents stopped him. “Father,” they said, “would you conduct the funeral tomorrow?” “Why,” he asked, when he had failed so badly in the hospital to console them, “why did they want him?” A mother replied, “Because when you took our hands and wept you showed that God was weeping with us, too.” 1

Jesus wept with us. But his response to death is not longer life on earth, it is not the sign of Lazarus who had to die a second time. His response is resurrection and eternal life. The Good Shepherd is himself the sign, the sacrament, showing us the Father’s desire to give life without end. Jesus revealed the answer to death by acting it out for us. He allowed those who wanted life on their own terms to crucify him. He suffered death with us and was buried. Then, without anyone to call him forth or unbind him, Jesus put an end to death by rising on the third day and ascending to the Father. Now the hour is coming when the Good Shepherd will call us by name. If we know his voice and come forth, he will unbind us, and then for the first time in our lives we will be fully and eternally alive.