The Fourth Sunday of Easter

Brothers and sisters, there’s a tendency among many of us today to rehearse to one another certain morbid preoccupations or worst case scenarios, that we play out in our heads in moments of distraction. We seem to have something of a fascination for imagining the worst possible thing that could happen, and then describing that to each other: “Just think if that were to happen . . .” or “You know it is just possible that this terrible thing could happen . . .”

For years it was the threat of nuclear holocaust. “Just think”, you would hear people say, “a conventional war is declared; then the superpowers are drawn into it; there’s a moment of panic, the button is pushed, and the entire population of New York City disappears – in a blaze of light.” Then, for several years, it was the destruction of the “O-zone” that became the focus of our anxieties. “Global warming” was what was going to finally finish us off, the whole human race being “overcooked” like chicken-pot-pie, left in the oven and gradually burned to a crisp.

More recently, the threat of terrorism has our imaginations, contriving new worst case scenarios : “Just think”, I recently heard someone say, “One terrorist, having infected himself with Small Pox, could walk around Kennedy Airport for an hour and cause an epidemic that would kill millions of Americans in a few weeks. Think about that!”

But perhaps the worst case scenario that spooks us the most, the one that generation after generation returns to with deep foreboding is the random and senseless victimization of an innocent child. “Just think”, we say to ourselves, “In our world today a child can meet with a priest to go to confession and be molested.” “Just think, a child can be walking home from school one day and meet a kindly stranger who offers him a ride, and never be seen again.” “Just think – a child might be born into a family that despises and abuses him. And I wonder if this worst case scenario, a child born into a world without love, I wonder if maybe this possibility is the worst of all the worst case scenarios because it sums up in itself all the others: The possibility that a child might be born into a condition of abandonment. Isn’t that the possibility that scares us the most; the possibility that the whole human race, all of us, have been born into a condition of abandonment?

If I’m right about this; if this last dark fantasy is the source of our deepest fears, then you might be interested in a curious incident that happened a few years ago involving a child psychologist who teaches religion, and a group of severely abused children. The children were very young; victims of the worst kind of abuse. They had been born into families who treated them like animals; abused them; ignored them; showed them contempt; and finally abandoned them. This goodhearted teacher thought it would be important for these children to know that Jesus did love and care for them, and so she hit on the idea of making a little figure of Jesus out of wood and a dozen or so little wooden sheep, and using these little figures, played out before the children the content of today’s gospel: The story of the “Good Shepherd”. By playing out this little drama, she hoped to show the children how Jesus is the good shepherd, and how the sheep follow him because he takes good care of them because he loves them and because they know he will never let anything bad happen to them.

Now this teacher foresaw that these particular children would probably be resistant to the idea of the good shepherd; doubtful, or dismissive, or just – bewildered by a story so completely contrary to their experience of the world.
But, as it turned out, it was the teacher who was in for a surprise.

As she later related the incident, the children, having barely allowed her to finish the story, spontaneously took up the little wooden figures in their hands, and with no prompting from their teacher, placed the figure of Jesus in front, and the sheep behind him in a line, and moved Jesus across the floor with the sheep following him. Amazed, the teacher looked on as the children then began speaking to the sheep in Jesus’ voice; saying to the sheep with a firmness and tenderness that were entirely convincing: “Don’t worry, I will protect you and take care of you. I will never leave you alone, because I love you very much, and I will always love you, and I would never let anything bad happen to you.”

Evidently, these children were very well acquainted with the “Good Shepherd”; actually seemed to be on quite familiar terms with him, as though they had enjoyed an intimate friendship with him for years. But according to their teachers’ training, this was impossible. She had been taught that the invisible God can only be made known to us through those concrete human relationships which we experience in the world, most particularly our relationship with our mother and father. But these children had no experience at all of a loving parent. They had been despised and abused and neglected by the only parents they had ever known. How could these children have come to know the Good Shepherd? Where did they meet him? Against her better judgment and contrary to all her training, this teacher was obliged at last to consider the possibility that, somehow, the intuition these children had of Jesus love for them was more convincing even than the testimony of their lived human experience. Jesus, in spite of all the obstacles a sinful world had placed in his path, found these little children, comforted them and became their friend, so that, when their teacher described Jesus to them, they knew exactly who she was talking about. 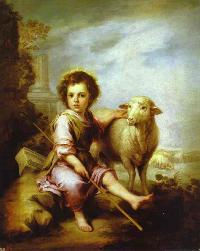 Brothers and sisters, I don’t want to alarm you but I wonder if we need to consider the possibility that there was in the classroom that morning only one child, and it was the teacher. Her young students, evidently wiser than their years; wiser even than their experience, had no real doubts that the Good Shepherd loved them, and was watching over them. It was evidently the teacher who was harboring private doubts about this, and it was the children who reassured her.

And yet, I think we all readily sympathize with the teacher’s doubts. Most of us here this morning, over the age of twelve, nurture the same doubts. We are the ones who are skeptical about Jesus the Good Shepherd. We are the ones who are preoccupied instead with dark fantasies of being abandoned by God to universal destruction; fantasies that we play out in enormously expensive film productions and then watch over and over again with a strange fascination. It is we who are resistant, doubtful, astonished when we hear from a child’s mouth the good news of the gospel proclaimed with the simplicity and confidence of Jesus own voice: “Don’t worry, everything is going to be all right. I love you. I will protect you. I would never abandon you.”

Undeterred by our resistance, the Good Shepherd speaks to us this morning; tries once again to divert our attention from dark imaginings, and says to us: “You are horrified by the sins that are committed in the world. I was also horrified when I lived in the world. You are afraid to die – of course you are. I was also afraid to die, and so, I made my dying an act of love for you. The Father received my offering and for love of you, raised me from the dead, and since that glorious day, there is no longer any reason for you to be afraid of death. But I came to you and I told you this. Did you not believe me?”

The Fourth Sunday of Easter

It is part of our makeup as human beings that when we are overexposed to some stimulus we become inattentive to it. It fades into the background that we take for granted and we focus our attention on the new and unfamiliar. Because we are by and large an articulate society and our communication technology is sophisticated and widely disseminated, speech can easily be taken for granted. We are surrounded by words, aural and visual. At times we may feel that we are bombarded by words. Without too much discrimination we may as best we can push them all into the background of our attention. One result of this is that we can forget the power of words, either for good or for harm. What holds our attention may be only the loudest or the most frequently repeated words, not necessarily the most beneficial.

Yet whether Old Testament or New it is undeniable that words have been God’s chosen way of addressing us. For the gospel of John Jesus Christ the final and unsurpassable revelation of God is the Word of God Incarnate. How do we respond to God’s words? Do we give then a casual hearing and then let them fade into the background along with so many other words that we have heard so often? 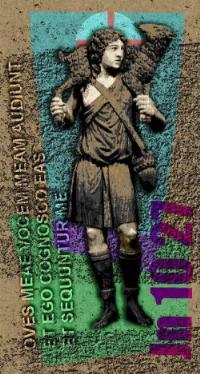 For the Jews and Greeks that heard God’s words through Paul and Barnabas how they responded was their own judgement on themselves. Some received them with joy as a message for eternal life. Others rejected and opposed them. It is unlikely that any of us would knowingly oppose God’s words, but if we are neglectful of them, they will be absorbed into the background of our attention. Louder and more frequently repeated words may control us, and these words may be in opposition to God’s words.

In this morning’s gospel Jesus says that our ability to be his followers depends on hearing his voice. Again the reward for hearing is eternal life. But if we hear and then forget, what good is the hearing? Rather than follow him we will drift after other words that we find more attractive.

God’s words are words of power. They can transform our lives. They can bring us through trials and suffering to the joy of eternal life. But God addresses us as free and responsible men and women. More correctly, God’s words bring us to freedom and responsibility. How we respond to them will be our own decision. Will we receive them with joy and gratitude as words for eternal life? Will we forget them and listen to other words that promise temporary happiness at best, but inevitably end in disappointment? May God grant us willing ears and minds to receive his words and hearts that cherish and nourish them.