The Funeral of Fr. Joseph Knapp

In the Rule of St. Benedict there is a whole section of what is called the
liturgical code. It is a pretty straight forward directive of how many psalms
are said at the different offices during the day-when to stand, when to bow,
what to do when you make a mistake. It is basically a little ceremonial. It
is so detailed that we do not even read it at the public reading of the Rule.
We skip it. But hidden among all the rubrics are a few very important things.
For instance — Benedict tells us that at Lauds and Vespers the Our Father
should be said aloud so we can be reminded of the covenant we make in that
prayer. One translation has it like this “let them be reminded of the pledge
they make to each other in the very words of this prayer.” The pledge of
course is to forgive as we have been forgiven. That is a tremendous pledge
but it is not the whole picture of our life together. When someone makes
final vows there is a covenant invoked, a type of pledge we make to take care
of each other. We have now completed our earthly covenant with Fr. Joseph. We
cared for him right up to his last breath. But, I must very quickly add Fr.
Joseph cared for us for many, many years before illness took him to the
infirmary. 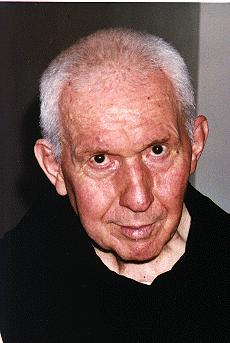 Fr. Joseph has held almost every office in the monastery. These are not
positions of prestige, but positions of service and care. He was Novice
Master for many years, he was Prior, Sub-Prior, Treasurer—he was a monk you
could trust with responsibility. Abbot Eugene must have noticed this early on
because in 1951 he petitioned Rome to grant a dispensation so Fr. Joseph
could be made Novice Master at the early age of thirty-four. The Constitution
required the age of thirty-five. The request had to go to the Congregation of
Religious in Rome. The dispensation must have been granted because we have on
file a two-page letter the Abbot General wrote to Fr. Joseph responding
point-by-point to five questions submitted by him. From the answers one can
tell these were important and very practical questions. He wanted to know
where his duties as Novice Master begin and end. He wanted to know if a
novice could be legitimately sent to our foundation in Ava. The answer was
no, evidently this must have been going on. Fr. Joseph was prudent enough to
want to know the proper way to form the novice. In fact, the Constitution he
lived under the first fifty years of his monastic life give the qualities of
the Novice Master as—exemplary life, given to prayers and works of
mortification and filled with prudence and charity. These are qualities Fr.
Joseph kept all his sixty-two years of monastic life. He was well formed in
these virtues long before the changes of Vatican II. He was not thrown off
course as some of us were at that time. He stayed the course, he persevered to
the end. 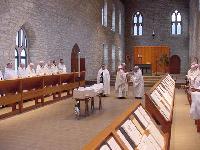 Some monks seem to have a natural inclination, a temperament for the monastic
way of life. I don’t think Fr. Joseph was one of those. He had an iron will
and held himself in and was cautious about letting anything distract him from
his ideals. The reason I say this is that occasionally the entertainer in Fr.
Joseph would come out—a snippet of a song or a couple of steps of a dance
routine. I never knew where this came from until I read a note his sister
wrote for me on one of the many occasions we notified the relatives that Fr.
Joseph would not live out the week and they should come if they wanted to see
him before he died. This note was written about five years ago. I’m not sure
which of his sisters wrote it, but she writes, “When my parents came to visit
Giles, the then Abbot and Prior told them they came to the guest house to
test his voice since he wanted to be a choir monk. Giles took that in stride
by giving them a one-man show of song and dance plus lines from plays he and
Vernon Hintz used to entertain at group meetings. The Abbot told my folks
they hadn’t laughed so much in a long time and when they took him into the
monastery the next day he was a changed boy and was that way ever since. But
I knew in my heart his sense of humor would prevail within him if things got
tough for him.” Of course she was right. Our sisters and brothers know us
better than we think. 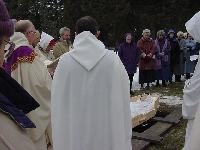 The changed boy was the beginning of the transformation of Fr. Joseph
Knapp—the call from God that Giles heard in the depths of his heart. Some of
his natural talents might have led him in another direction but Fr. Joseph
knew in his heart of hearts this is what he wanted to do with his life, and
he gave 100 percent. He was totally dedicated.

In a way, there seems to be two Fr. Josephs. There was the monk we knew in
his years of health when he was a pillar of the community and then there was
the last fifteen years or so when he was confined to the infirmary sharing in
the suffering of Christ. The reading at this Eucharist reflects the mystery
of this part of Fr. Joseph’s life. “It is good to wait in silence for the
Lord to come.” “If the grain of wheat falls to the ground and dies,
it yields a rich harvest.”

We have completed our pledge with Fr. Joseph, the covenant we make with each
other at solemn vows. He can no longer serve us as he did forty years ago. We
can no longer care for him as we did last week. But the pledge still holds.
The covenant goes into eternity because it was forged in the Passion and
Resurrection of Christ. He is still our brother, a member of the New Melleray
Community, now in a place we long to be. “And may God bring us all together to
life everlasting.”